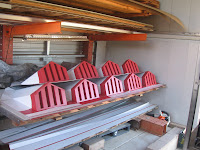 Our roofing contractor sent along the photo at right, showing some of the dormer vents that will be on our new roof.  He's fabricated ten of these fireproof convection vents that will help keep our attic cool after the new roof is installed.  These vents will be installed high up on the roof.  There will also be soffit vents that will draw cool air into the attic from under the eaves.  The white areas are still covered with protective plastic; the entire vent will be bright red once installed.

The current plan is for the fabricated panels to be delivered next Wednesday.
Posted by Unknown at (permalink) 4:48 AM No comments:

Interesting read about brain differences between cultures...
Posted by Unknown at (permalink) 4:42 AM No comments:


Inner pessimism and powerlessness: That is a dangerous combination.

Read the whole thing.
Posted by Unknown at (permalink) 4:40 AM No comments:


If you want to know why us libertarian types are skeptical of the government's ability to prevent housing market bubbles, well, I give you Exhibit 9,824:  the government's new $1000 down housing program.

Read the whole thing.
Posted by Unknown at (permalink) 4:39 AM No comments:

The backdrop is the accusation by Congressman John Lewis, earlier this year, that the “N word” had been hurled at him by angry Tea Party members.  This quickly became a Progressive meme, echoed by the lapdog lamestream media.  In this video, a reporter all caught up in that meme confronts what must be a very disconcerting reality: a room full of undeniably black members of the allegedly racist Tea Party.

What ensues is instructive on several levels. Watch...

And it ain't half bad, either.  Very political message...

Totally safe for work.  Watch it before you start thinking that my blog is going to the dogs...

Smart and sassy move, Eva!
Posted by Unknown at (permalink) 4:27 AM No comments:

Empty.  Six quarts of “hummer juice” consumed by scads of hummingbirds yesterday.  The two quart-sized oriole feeders were less than one third gone.  The hummers were mad – you could almost hear them yelling “ What's up with the service around this joint?  Where's our food?  BRING US OUR FOOD, NOW!!!”

This morning the dogs were very subdued.  Noses down.  No noise, not even a subliminal growl.  There was a musky scent in the air, which was at 61°F, 35% relative humidity – practically perfect olfactory conditions.  The waning moon was just above the northeastern horizon.  The Pleiades were above and to the right of the moon, but very bright and not washed out at all. Jupiter was very high in the southeast, and due east my old early-morning friend Orion was just starting to appear over the mountains.  The Milky Way was a great splash all across the high sky from the northeast to the southwest.

The dogs were completely unimpressed by all this celestial glory – but they were very impressed by something they smelled or heard.  All of them stayed very close to me – not one tug on the leash.  They were cautious and worried, even the normally oblivious Race, who usually bounds around looking for pine cones and other fun toys.  Something big and scary must have been nearby; the musky smell would indicate a cat.  A mountain lion, perhaps...
Posted by Unknown at (permalink) 3:53 AM No comments: