Steve McIntyre keeps plugging along, shedding more and more light on the otherwise completely opaque calculations (and machinations) of the scientists associated with ClimateGate.  In this lovely bit of reverse-engineering, McIntyre figures out how Mann and his co-conspirators arrived at some of the graphs they used to support their conclusions.  In the process, their highly selective choice of data is revealed.  Of course, they chose the data that supports their conclusions.

Here's an analogy for those of you not familiar with how science is actually done.  It's as if a scientist came across a pile of playing cards randomly lying about on the floor.  After surveying all the cards, the scientist then picks a “sample” of 8 cards, all of which “happen” to be hearts – and then declares “All the playing cards are hearts!”
Posted by Unknown at (permalink) 7:52 AM No comments: 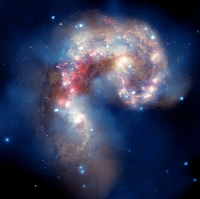 I can't help but wonder what it would be like to be an inhabitant on a planet in the neighborhood with a good view of this spectacle...
Posted by Unknown at (permalink) 7:46 AM No comments:

They're being used by police in Europe to suss out Muslim harassers.  Neo-neocon has some thoughts...
Posted by Unknown at (permalink) 7:43 AM No comments: