Bumper Sticker of the Day...

From a collection forwarded by my mom:

Posted by Unknown at (permalink) 3:35 AM No comments:

Environmental scientist Patrick Michaels has an interesting column up at the WSJ, in which he lambastes the recent Muir Russell report that essentially exonerated all the Climategate scientists and their organizations.  He also says this:


Climate Research and several other journals have stopped accepting anything that substantially challenges the received wisdom on global warming perpetuated by the CRU. I have had four perfectly good manuscripts rejected out of hand since the CRU shenanigans, and I'm hardly the only one. Roy Spencer of the University of Alabama, Huntsville, has noted that it's becoming nearly impossible to publish anything on global warming that's nonalarmist in peer-reviewed journals.

Read the whole thing.
Posted by Unknown at (permalink) 3:33 AM No comments: 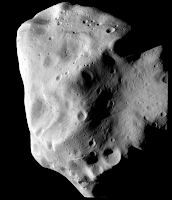 Early indications are that the Rosetta robotic explorer's flyby of the asteroid Lutetia was a rip-roaring success.  An early photograph release of Lutetia at the closest point of the flyby is at right (click to enlarge).  More data will be forthcoming soon...
Posted by Unknown at (permalink) 3:27 AM No comments: