Debbie is progressing incrementally, looking and feeling a bit better every day.  She's still essentially bedridden, though, and she's going a little stir crazy because of it.  It's been almost three weeks since her fall, and since she's been imprisoned in her (nice, comfortable, full-service included) bed.

Last night, one of her friends from southern California (Marsha Y.) stopped by for a great visit.  She stayed for several hours of conversations and reminiscences.  We stayed up way past our bedtime! 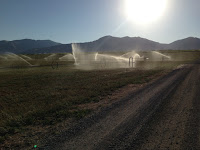 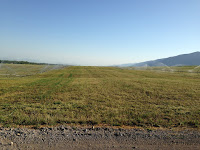 I took a walk with the dogs in the cool morning, up the farm road on the hill to the east of our house.  In the past few days these fields have dramatically changed in appearance – the three foot tall alfalfa has all been mowed, raked, dried, baled, and removed.  Now there's 4" stubble remaining, and the irrigation is going full blast (see at right).  When we got to the top of the hill, we could see 19 strings of wheel lines (like those in the photograph) going – and some of those strings were close to a mile long.

As we were walking back into our driveway, a gigantic loader drove by us, very slowly.  It was one that our neighbor Tim D. had arranged for us, to do some terraforming down on the southeast part of our property.  This is the same general area where the Mormon horde helped us clean up a few weeks ago.  There was a part there, roughly an acre in extent, that was so weirdly sloped that there was no way I could mow it.  The loader was there to sculpt that weirdness into something more attractive, and more maintainable. 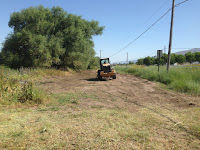 The loader operator, a genial fellow named Alan L., talked with me for about a half hour about exactly what I wanted to accomplish.  Then he (very politely) told me to get the hell out of his way and let him get the job done.  Three hours later, he'd finished – and had created something considerably better than I'd hoped for.  I wish I'd been smart enough to take a “before” photo, but alas, I wasn't.  However, you can see clearly here that we how have an eminently usable piece of ground here!  I'm going to plant some grass here for now, but later in the bottom, flat part we're going to plant something that will make an attractive roadside display.  That's going to take some research on our part, to find something that will do well here without any irrigation (this is one of the few awkward spots on our place to irrigate).  I did have one bizarre thought later, though – it just might be feasible to put a solar powered drip system in that sourced its water in the canal just 20' away.  Another thing to research :)

That was plenty of excitement for one day, but it got even better.  Around 1 pm, I got a call from a trucker – he had a load for me.  I was expecting my air compressor (which I've been trying to buy since January!), so I got my tractor going and met him by the road, expecting to be unloading 650 pounds of air compressor.  Instead, he had a much smaller pallet.  I had to get the bill of lading out to see what it was – and it was the PTO powered pressure washer that I ordered back in March.  It finally came in!  Woo hoo!  I took it into the shed and started to unpack it, and my phone rang again – another trucker with a load – and this time it was the air compressor.  Double woo hoo!

So I spent the next two hours unpacking and inspecting the two shipments.  The pressure washer is a particularly impressive piece of machinery.  It's a pile of parts and a bag of bolts right now, though the pump is fully assembled.  The pump is Italian, and I'd have guessed that even if I didn't already know – there's a certain style to Italian machinery that one rarely sees in machinery made anywhere else.  This is a purely functional, industrial piece of kit – but some engineers spent time making it beautiful anyway.

The air compressor was remarkable for a completely different reason: it was not a kit!  I was shocked – for once, a piece of equipment I ordered came fully assembled.  Wow!  However, the air compressor more than makes up for that by the complexity of its installation.  I have to connect it to both 240 V and 120 V, plus an air intake (to clean outside air), the compressed air output, and two separate water drains (one for the tank, the other for the air dryer).  Another project :)

The word is starting to get out around town that Debbie is injured again.  This evening, one of the members of the Relief Society for the ward we live in stopped by to check on us.  As with all their visits, she just wanted to make sure we got any help we needed.  She looked disappointed that we really didn't need any :)  She chatted with Debbie for a while, very friendly and neighborly.  She's good friends with Michelle H., the woman who cleans our house.  Small towns are nice that way.  When she left, she left Debbie wearing a smile and feeling very good indeed about the area we retired to.

We love living here!
Posted by Unknown at (permalink) 6:29 PM No comments: 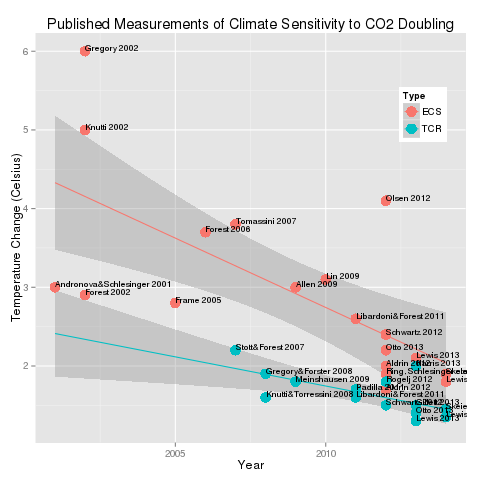 Climate alarmists converging on reality...  What a pleasant thought that is!  Jo Nova re-published the lovely graphic at right...
Posted by Unknown at (permalink) 9:18 AM 1 comment:

Are you still depending on major media for your news?

Are you still depending on major media for your news?  By that, I mean outlets like the New York Times, CNN, the Los Angeles Times, or Fox News.  Here's an excellent example illustrating why your trust is most seriously misplaced.  There are some slightly better outlets: the Wall Street Journal, Financial Times, etc.  But the difference is more like that between Coke and Pepsi, not Yugo and Mercedes.  In my own experience, bloggers and independent journalists (like Michael Totten, or Michael Yon) are far more reliable and insightful sources.

Before you start condemning the major media, you should reflect upon why they are so bad.  The reason is simple.  The kind of “news” they're spewing is manifestly what consumers want.  It's what draws the viewers and readers.  It's not their fault that we're (collectively) a bunch of moronic thrill seekers.  It's ours...
Posted by Unknown at (permalink) 9:15 AM No comments:

Why are the Baltic states nervous about Russia?

Why are the Baltic states nervous about Russia?  Here's why...
Posted by Unknown at (permalink) 9:10 AM No comments:

Cheaper batteries ... through better manufacturing.  Fascinating story about the startup 24M...
Posted by Unknown at (permalink) 9:09 AM No comments:

Best Fourier series graphic evah!  I could watch this for hours...
Posted by Unknown at (permalink) 9:06 AM No comments:

This is the real promise of manufacturing by 3D printers...

This is the real promise of manufacturing by 3D printers ... making things that would be impossible with conventional manufacturing techniques.  Gotta work on the cost part, though :)

3D printing has a place with prototyping and very low volume manufacturing, but for anything needed in quantities above a few dozen, conventional manufacturing techniques are inherently less expensive.  That doesn't look likely to change anytime in the foreseeable future.  But ... 3D printing does let you make some things that you couldn't practicably make by any other means...
Posted by Unknown at (permalink) 9:03 AM No comments:

Solid-state drives to reach price parity with hard disks next year?  So says this fellow, and quite a few others.  My favorite sentence in the article:


“If you were told that a BMW and a golf-cart were the same price, which would you buy?”

I'm already buying the BMW (only), even though it still costs a bit more.  I haven't purchased a hard disk in about four years...
Posted by Unknown at (permalink) 8:59 AM No comments:

Making a Celtic stone axe ... using only primitive materials and tools.  This is impressive.  I'm in awe of this maker.  But ... I do like my power tools :)
Posted by Unknown at (permalink) 8:55 AM No comments:

It's box turtle time...  My sister Holly found one laying eggs in her driveway!  More photos here...
Posted by Unknown at (permalink) 5:58 AM No comments: