This is a common wildflower around these parts, and one of our favorites for its exquisite blue hues.  The photo is courtesy of Botany Photo of the Day, which I continue to highly recommend to anyone interested in botany or wildflowers (which are the subject of many of their photos)...
Posted by Unknown at (permalink) 7:30 AM No comments:

As If We Needed Proof...


...the memo reveals that when the film was shown to a group of Cuban doctors, some became so "disturbed at the blatant misrepresentation of healthcare in Cuba that they left the room".

Castro's government apparently went on to ban the film because, the leaked cable claims, it "knows the film is a myth and does not want to risk a popular backlash by showing to Cubans facilities that are clearly not available to the vast majority of them."

Sicko investigated healthcare in the US by comparing the for-profit, non-universal US system with the non-profit universal health care systems of other countries, including Cuba, France and the UK.

I suspect Moore is just out to make a buck, and couldn't give a hoot about the truth of his assertions, or consequences of them...
Posted by Unknown at (permalink) 7:26 AM 1 comment:

Help Needed: a Fox is in Trouble... 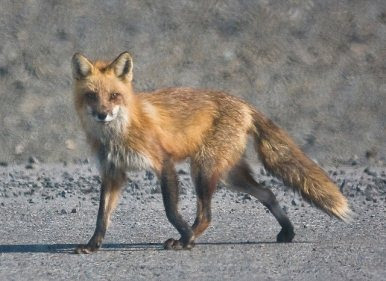 
We need some help catching a red tail fox that has a plastic jar stuck on its head. We found the fox Tuesday night on Lyons Valley Rd by Luck Kid Ranch. He was wondering along the side of the road trying to at a road kill rabbit. On Wednesday, Animal Control came out and found the fox in the canyon just out of reach. They gave us a net catch him and set up a trap but with a jar on its head I don't think it can smell the bait. Animal control called Thursday that the fox was by the Arco on 94 in town. He was reported heading east. Possible back to our original location. If anyone has seen him today or sees him in the next few days please let us know asap. Its going on at least 5 days without water. Email cmspm@att.net or call Rusty at 619-920-7773

Can you help this fox in need? If so, please contact Rusty!
Posted by Unknown at (permalink) 6:38 AM No comments: