Paradise babies...  We've got five kittens in our “isolation room” (a bathroom in our basement that we never use), and our neighbor's cow (Annabelle) gave birth to a bull calf earlier today.  Photos of both below... 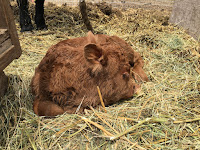 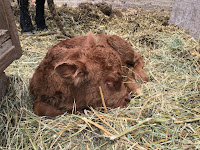 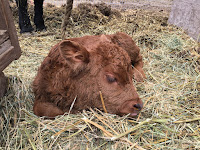 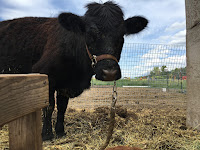 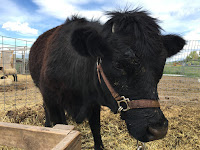 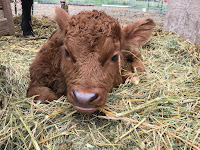 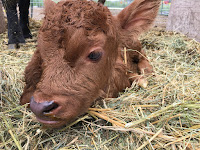 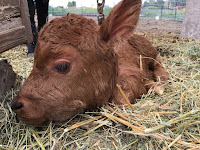 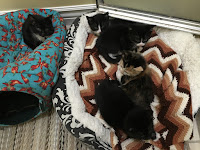 Posted by Unknown at (permalink) 4:32 PM No comments:

When I went out to Virginia to visit my mom, my intent was to bring her back with me to set her up in an “independent living” retirement community near us in Logan, Utah.  That didn't quite work out as planned; some logistics didn't come together, and almost at the last possible moment.  Now I'm back in Utah, and scrambling to get that stuff straightened out.  When I do, I'll be flying back to toss her on the plane to come out here.  With any luck at all, by the middle of next week she'll be out here near both me and my brother Scott.

The retirement community let me wander around and talk with the people living there, and the staff, on two different occasions.  All by itself, that was encouraging – that they're not at all afraid to let me poke around.  I've now talked with a total of 10 residents, and they are uniformly happy to be there.  Several of them were effusive in their praise for the staff, and none of this was in earshot of them.  That seems remarkable to me for such a facility.  I didn't keep count, but 7 or 8 of the residents also volunteered just how good the food was there.  Today I saw the preparations for an outing that included a picnic; there were trays of carefully wrapped sandwiches on delicious looking bread, some marked with names, and lots of other home-style picnic fixing (including a giant bowl of potato salad that had me drooling).  We're hoping that all these first impressions turn out to be accurate, and that my mom is just as happy there as these 10 residents appeared to be. 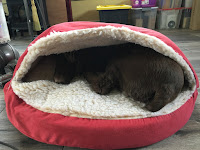 Meanwhile our dog Miki has joined me in my office.  He's not working nearly as hard as I am, though :)  If you enlarge that photo and look hard, you can just barely make out his brown nose on the left side of the furry brown lump.

Debbie found out last night that we're getting two puppies from the litter Sheila M. (our breeder) just raised, though we don't know which two yet.  She saw the whole litter last night, and says they're huge – and every last one is totally adorable.  One of them in particular reminded her strongly of Mo'i when he was a puppy.  We pick up our two little devils on Saturday.  Our household will then instantly become even more chaotic than it already was!  I can also confidently predict that we will have quite a few more young visitors, too: with 5 kittens and 2 puppies, we'll probably have to bar the door to keep them away...
Posted by Unknown at (permalink) 12:15 PM No comments: