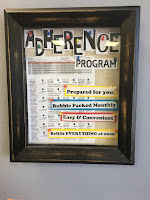 Paradise ponders: funny signs, bountiful hay, migraines, and concrete-cutting edition...  When I first saw the sign at right, from some distance, I thought someone had framed one of those Hollywood ransom letters made from newspaper clippings.  It's actually an advertisement hanging in our local drug store.  When I took this photo, two of the women working there came over to see what I was doing.  Apparently the resemblance had never occurred to them, but when I mentioned it they got a good laugh out of it!  :)

The last couple of days haven't seen much progress on our great sprinkler project – but today we've got all sorts of action once again.  The problem before today was a migraine (on the part of my main contractor), and his main employee got sick on top of that!  But today they're back, and things are happening.  One of the things that happened is a fellow showed up to cut both ends of a 20' long stretch of ugly concrete sidewalk, freeing it to be removed.  We're going to put a flagstone walkway in its place.  Another thing that's still happening: large quantities of topsoil are being moved from piles into all the low places in our yard.  It already looks vastly better than it did, and they've only moved roughly half the dirt.  Progress!

Yesterday Scott N. (the guy who leases our south field, 12 acres, for alfalfa) baled up the third cutting for the year.  His yield was 362 bales, a record for that particular field (despite the fact that I took one acre out of production three years ago, to make a play area for our neighbor's kids).  Scott's been leasing this field for 12 years, so he's got a bit of history on it.  There's a couple views of that field below, when he was roughly 1/2 way through baling it. 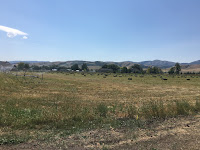 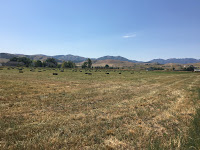 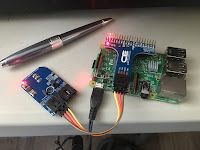 I'm making nice progress on the software for my irrigation supervisor computer.  This morning I moved it all over to the computer you see in the photo at right (the pen is there to give you a sense for just how small that computer is).  The large board is the Raspberry Pi 3B computer, and the little board to the left is a temperature, barometric pressure, and relative humidity sensor.  I have two other similarly small boards to hook up after I get this one working.  I now have a complete debugging environment up on the Pi, and everything I built on my laptop is now running just fine on the Pi as well.  I figured that process would take me a couple of days, as there were many steps along the way that were new things to me.  Instead it took just five hours.  Not bad at all!

Many moons ago, back in the late '70s and early '80s, I designed and built quite a few prototypes of small, single-board computers that could be used for embedded systems (my irrigation supervisor is an example of an embedded system).  Only one of them actually made it into production.  Those were nearly all based on Z80 CPUs, though I did one with a 6502, and another with a 68000.  The smallest of those was a Z80 design the size of an ordinary shoe box, and I thought that was a miracle of miniaturization.  Though it was small, it required a fan – a rather powerful fan – to cool it off.  I don't remember the exact power consumption, but it must have been around 50 watts.  This little Pi, running my program, consumes just 2.5 watts – and even without a fan those little heat sinks are just barely above room temperature.  The processor on it is millions of times more powerful than that Z80, and it's got 15,000 times as much RAM.  That Z80 had a few kilobytes of ROM (the Pi has 16 megabytes), and no disk (while the Pi has 32GB of solid state disk).  The Z80 prototype probably had a couple hundred dollars worth of parts in it; the Pi was $39.  I never seem to lose my sense of wonder at the pace of advancement in digital systems...
Posted by Unknown at (permalink) 1:18 PM No comments: