Klavan Explains; You Laugh and Cry...

If you've been following the debates on the science behind global warming, you already know who Steve McIntyre is – the proprietor of the Climate Audit web site and quiet, diligent checker of the climate scientists' work, the gadfly who is always insisting on replicable results from honest and accurate data.  Mention his name in the presence of Michael “hockey stick” Mann, and you'll get an earful of vitriol and a face full of spittle.

A recent Freedom of Information Act request has revealed emails and other evidence that Steve McIntyre's actions had an actual impact.  Several scientists who contributed to the infamous “hockey stick” report agreed with McIntyre's criticism – much to Michael Mann's very vocal chagrin.  In the end, their inability to reconstruct the result with honest and accurate data caused a key paper to be withdrawn.

The gears of science grind more slowly than I had expected after the original ClimateGate revelations several years ago.  But they are grinding.  Here we have an example of traditional, peer-reviewed publication actually working: a paper by the warmists was forced to be withdrawn, and Steve McIntyre's criticism was the proximate cause of its withdrawal.  The results criticized by McIntyre are not some trivial sideshow – they are the main act in the hockey stick result that has led to so much wackiness in the funding and policy decisions in its wake.

Congratulations, Mr. McIntyre.  Let's hope this first instance of gnashing gears leads to many more...
Posted by Unknown at (permalink) 6:02 AM No comments:

Appropos of nothing at all; just ran across it... 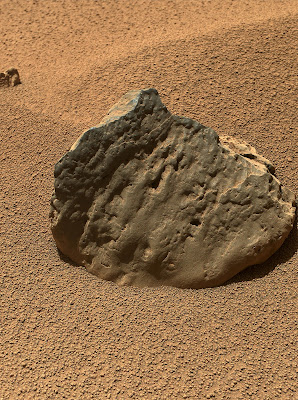 If you're like me, following the progress of our robotic explorers over the years, then you must surely share my amazement at the imagery pouring out of the Curiosity rover mission on Mars.  The photo at right (as usual, click to enlarge) is a fine example.  Yes, it's just a rock.  But (a) it's a rock in glorious, high-resolution color, and (b) it's just one of thousands of such images already returned from Curiosity.

And of course, the imagery is just the first bit that gets our attention – vision being an important human sense.  The other science instruments are no less spectacular.  For example, below is a graphic showing the first results from the X-ray diffraction instrument (part of the Chemical & Minerology package) on board Curiosity.  If you know what you're doing (which I most certainly do not!), you can read this result to determine what minerals are in the sample you're analyzing.  This instrument, in its normal form on Earth, is many times larger, heavier, and more power-hungry than the astounding miniaturized version now operating on Mars. 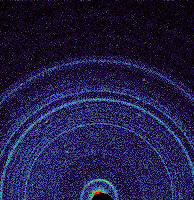 One of the arguments proponents of manned space flight use is that by putting a human “on the ground” in places like Mars, much more science work can get done than is possible with robotic explorers.  This argument, in my opinion, had a reasonable amount of merit back in the '60s and '70s.  Technology had not yet advanced to the point that multiple sophisticated instruments and high-resolution cameras could be reliably flown to distant planets.  That started to change in the '80s, and has continued advancing to the point we're at today.  With a payload that is a tiny fraction of what it would take (both in weight and in cost) to support a single human on Mars for a couple of years (not to mention returning him or her), the Curiosity mission has put an array of very sophisticated instrumentation on Mars.  The capabilities of this instrument array greatly exceed what any human geologist could bring to bear.

Maybe someday the federal government will figure this out, and transform NASA into an agency dedicated to robotic exploration of the Solar System.

I must be dreaming.  I just posited a government agency pursuing a logical path...
Posted by Unknown at (permalink) 5:36 AM No comments: