The study reproduced at right (in its entirety; click to enlarge) was published in a peer-reviewed science journal.

Really.
Posted by Unknown at (permalink) 4:13 AM No comments: 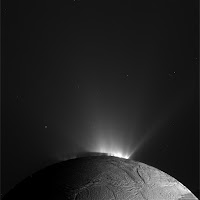 The image at right (click to enlarge), of Saturn's moon Enceladus, was taken a few days ago by Cassini on its closest approach yet (to within just 48 km).

If you've been following the fascinating discoveries Cassini has been making about Enceladus, then you know that this moon is one of the most fascinating and surprising objects in our solar system.  The jets visible so clearly in this photo are primarily composed of water – and the simple existence of that water is perhaps the most surprising finding of all the many surprises from Enceladus.

Cassini has now been making steady, amazing contributions to science for over five years.  It's still going strong, though getting closer and closer to its end of life.  The scientists are directing it now to missions that would have been deemed too risky earlier in its mission, such as this very close pass to Enceladus.

More Cassinis, please, NASA.
Posted by Unknown at (permalink) 4:10 AM No comments:

These gems nicely sum up the reasons why the U.S. Marine Corps is feared by all the bad guys in the world:

When In Doubt, Empty The Magazine

The Marine Corps – When It Absolutely, Positively Has To Be Destroyed Overnight

Death Smiles At Everyone – Marines Smile Back

Marine Sniper – You can run, but you'll just die tired!

What Do I Feel When I Kill A Terrorist? Just a little recoil..."

Life, Liberty and the Pursuit of Anyone Who Threatens It

Happiness Is A Belt-Fed Weapon

Artillery Brings Dignity to What Would Otherwise Be Just A Brawl

A Dead Enemy Is A Peaceful Enemy – Blessed Be The Peacemakers

Except For Ending Slavery, Fascism, Nazism, and Communism, WAR has Never Solved Anything.

Posted by Unknown at (permalink) 3:57 AM No comments:

Terrorists and the Washington Monument...

Listen to the man, folks.
Posted by Unknown at (permalink) 3:48 AM No comments:

For some reason, my mom thought of us when she read this:

Four men were bragging about how smart their cats were. The first man was an engineer, the second man was an accountant, the third man was a chemist, and the fourth man was a government employee.

To show off, the engineer called to his cat, "T-square, do your stuff."

T-square pranced over to the desk, took out some paper and pen and promptly drew a circle, a square, and a triangle.

Everyone agreed that was pretty smart.

But the accountant said his cat could do better. He called his cat and said, "Spreadsheet, do your stuff."

Spreadsheet went out to the kitchen and returned with a dozen cookies. He divided them into 4 equal piles of 3 cookies.

Everyone agreed that was good.

But the chemist said his cat could do better. He called his cat and said, "Measure, do your stuff."

Measure got up, walked to the fridge, took out a quart of milk, got a 10 ounce glass from the cupboard and poured exactly 8 ounces, without spilling a drop, into the glass.

Everyone agreed that was pretty good.

Coffee Break jumped to his feet...

Crapped on the paper...

Screwed the other three cats...

Claimed he injured his back while doing so.

Put in for Worker's Compensation...and went home for the rest of the day on sick leave.

AND THAT, MY FRIEND, IS WHY EVERYONE WANTS TO WORK FOR THE GOVERNMENT!

I hope my mom thought of us because of the cat theme, and not because she thinks we want to be government employees!
Posted by Unknown at (permalink) 3:45 AM No comments:

Don't Mess with the Old Guys!

My (much younger) colleagues at work had a good laugh over this:

Posted by Unknown at (permalink) 3:37 AM No comments:

Reader Doug W. forwarded this fascinating Atlantic article (by David Freedman), about a scientist who is systematically studying the errors in science as it is practiced today.  It's longer than most of what I link to, but if you're at all interested in understanding the process of science, it's well worth your time.

Though the article focuses on medical science, Doug points out that what it says is obviously applicable far more broadly – such as to climate research.  I read the article with that thought in mind, and this passage jumped out at me:


Though scientists and science journalists are constantly talking up the value of the peer-review process, researchers admit among themselves that biased, erroneous, and even blatantly fraudulent studies easily slip through it. Nature, the grande dame of science journals, stated in a 2006 editorial, “Scientists understand that peer review per se provides only a minimal assurance of quality, and that the public conception of peer review as a stamp of authentication is far from the truth.” What’s more, the peer-review process often pressures researchers to shy away from striking out in genuinely new directions, and instead to build on the findings of their colleagues (that is, their potential reviewers) in ways that only seem like breakthroughs—as with the exciting-sounding gene linkages (autism genes identified!) and nutritional findings (olive oil lowers blood pressure!) that are really just dubious and conflicting variations on a theme.

Most journal editors don’t even claim to protect against the problems that plague these studies. University and government research overseers rarely step in to directly enforce research quality, and when they do, the science community goes ballistic over the outside interference. The ultimate protection against research error and bias is supposed to come from the way scientists constantly retest each other’s results—except they don’t. Only the most prominent findings are likely to be put to the test, because there’s likely to be publication payoff in firming up the proof, or contradicting it.

These are exactly the points that many AGW skeptics make about the IPCC reports and much of the “settled science” of climatology, and the reaction (both by the scientists and the press) is exactly as described.

The overall conclusion is that science is a messy, error-filled process that nonetheless drifts in the general direction of increasing truth and knowledge.  I'd argue that skepticism is an essential part of the scientific process, in particular helping with the direction of the drift...
Posted by Unknown at (permalink) 3:34 AM No comments:

If you're unfortunate enough to know who Keith Olbermann is, then you know that what he needs more than anything is a good smackdown.  That's exactly what has happened here, delivered by none other than Bristol Palin, of all people.  Money quote:


I have never claimed to be perfect. If that makes me the "worst person in the world" to Mr. Olbermann, then I must apologize for not being absolutely faultless like he undoubtedly must be.

Definitely read the whole (short) thing.
Posted by Unknown at (permalink) 3:18 AM No comments:

Wealth vs. Health, Over Time...

Not only is the information presented here interesting in and of itself, but the video is a terrific example of the power of well-done visualizations.  You won't regret spending a few minutes with this video:

Posted by Unknown at (permalink) 3:15 AM No comments:

Mostly I get to read Lileks, or listen to him on the Ricochet podcast.  Here's a video interview.  Oh, would that our newpapers and online media were full of wit like his!

Posted by Unknown at (permalink) 3:12 AM No comments: