The British Royal Statistical Society has come out with strong criticism of the math behind Michael Mann's infamous “hockey stick” graph.  The British press is all over the report; naturally, the American press is not.  The blogs are covering it, of course.

Steve McIntyre (mentioned positively in the RSS report) proceeds with his usual calm but merciless examination of it.

Jean catches NASA's GISS data in direct conflict with the actual measured data.  Oops.  How's that linear interpolation thing working out for you, James Hansen?
Posted by Unknown at (permalink) 4:47 AM No comments:

An Optimistic Look at November...

Interesting analysis by a pollster...
Posted by Unknown at (permalink) 4:39 AM No comments: 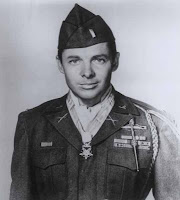 Many of you will instantly recognize the man at right, but some of my younger readers probably won't even recognize his name: Audie Murphy.  He was a Marine in World War II, and the most decorated American soldier in that conflict – a hero by any measure.

After the war, Audie earned a fortune in the movies – then squandered it all on wine, women, and gambling.  When he died in 1971, his widow inherited only a large debt.

I knew that story, both sad and inspiring, but didn't know the rest of the story – all inspiring – until I read about the death of his wife (at left) this week.  She spent the last 35 years taking care of wounded and sick soldiers at a VA hospital in Sepulveda.

I'd say Audie married a woman above his rank...
Posted by Unknown at (permalink) 4:36 AM No comments:


"It is a vital national security interest of the United States to reduce these conflicts because whether we like it or not, we remain a dominant military superpower, and when conflicts break out, one way or another we get pulled into them."

I suspect that remark was unintentionally revealing.  The man does not like it that America is a superpower, and especially that we are the only one still standing.

Personally, I think it's absolutely essential that America remain a superpower – and preferably the only one still standing.  I'd much prefer that America be the world's cop rather than, say, Iran, India, Israel, or (shudder) France...
Posted by Unknown at (permalink) 4:23 AM No comments: