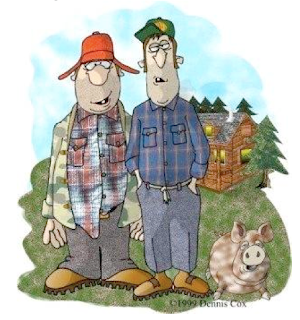 
Curtis & Leroy saw an ad in the The Oxford Eagle Newspaper in Oxford, Mississippi. and bought a mulefor $100. The farmer agreed to deliver the mule the next day.

The next morning the farmer drove up and said, "Sorry, fellers, I have some bad news, the mule died last night."

Curtis & Leroy replied, "Well, then just give us our money back."

The farmer said, "Can't do that. I went and spent it already."

They said, "OK then, just bring us the dead mule."

The farmer asked, "What in the world ya'll gonna do with a dead mule?"

The farmer said, "You can't raffle off a dead mule!"

Leroy said, "We shore can! Heck, we don't hafta tell nobody he's dead!"

A couple of weeks later, the farmer ran into Curtis & Leroy at the Piggly Wiggly grocery store and asked, "What'd you fellers ever do with that dead mule?"

Curtis said, "We raffled him off like we said we wuz gonna do."

Curtis said, "Well, the feller who won, got upset. So we gave him his two dollars back..."

Curtis and Leroy now work for the government.

They're overseeing the Bailout Program.

For my readers in Europe and on the West Coast: there really is a chain of stores called Piggly Wiggly. Really, there is.
Posted by Unknown at (permalink) 4:29 AM No comments:

The WSJ has a good summary of Elena Kagan's background and experience.  There's lots more on the intertubes.

My own take: she's far less bad than someone Obama might have appointed if the political situation wasn't so disastrous for the Democrats right now.  I suspect he and his aides have done the political calculus, and are betting that Ms. Kagan has the right combination of relatively mild leftism and absence of rabid anti-conservatism to at least have a chance of making it by the Senate.

It could have been much worse...
Posted by Unknown at (permalink) 4:22 AM No comments: