By popular request...  Well, one request, anyway, from reader Chuck W. :)  Below a screenshot of the status page on the irrigation system supervisory program's web site as it stands right now.  The indicators and gauges update about once per second.  The green rectangles are indicators that turn red when off (in other words, if the pump turns off, the right hand indicator turns red).  The top row of gauges duplicates the physical gauges in the cedar shed that houses my irrigation system, showing the water pressure at various places in the system.  The middle row of two gauges shows the differential pressure across each of the two filters in my system – when that goes over 5 psi, it's time to clean them.  Over 8 psi and things are getting really bad.  The bottom row of gauges gives a simple weather readout. 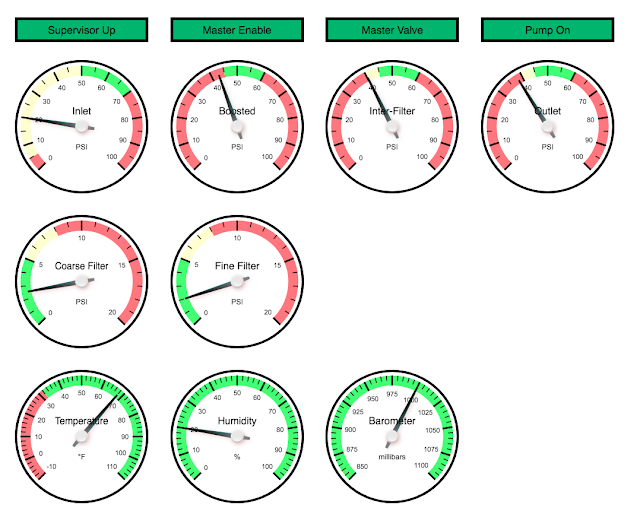 Posted by Unknown at (permalink) 10:33 AM No comments:

Paradise ponders: happy-but-sick kitty, “first pressure” on our irrigation pump, sneaky Americanisms, and unlikely bird identification...  Yesterday afternoon our vet's office snuck in an appointment for us with Laki, the kitty we found out in Blacksmith Fork Canyon.  They did an exam and took blood for testing, with some results in just a few minutes.  The results: she's sick (has a moderate fever), some upper respiratory congestion, and needs food.  The diarrhea we observed is most likely due to a combination of her illness and her suddenly getting as much good food as she wants.  She tested slightly positive (antigen test) for the feline leukemia virus (FeLV) – so now we have to wait for six weeks, test her again, and see if she managed to fight it off.  There's a good chance that she will, as roughly 70% of cats do – though with her immune system compromised by malnutrition and who-knows-what disease she picked up, her chances aren't quite so good.  For now she's getting a round of antibiotics, some meds for the diarrhea, good nutrition, clean water, a bath, isolation from our other kitties, and lots of attention.  I visited with her this morning, and I can tell you we've got one very happy kitty there...

This morning our irrigation pressure was restored, albeit to a low level (30 psi).  I pressurized the system with the pump off, and ... no leaks!  Hooray!  So then I decided to light off the pump for the first time, to see if the system would maintain the desired 50 psi at the output.  I could only do this with the outlet shut off at the cedar shed, as the sprinkler contractor is in the middle of installing the pipes in our back yard, and there are open ends everywhere.  The first time I turned on the pump's breaker, I went through a programming procedure for the variable frequency drive (VFD) system, and checked that its pressure sensor was working correctly.  Then I told the VFD to start the pump, and ... promptly got a fault.  “Shorted ground” was the diagnostic message that appeared.  I took the cover off the pump's wiring box, and inspected it carefully – and found one tiny little strand of the ground wire touching a terminal it shouldn't have been touching.  Nice diagnostics!  I fixed that, and again told the VFD to start the pump.  This time the pump started up, slowly at first and then building up speed as it ramped the pressure up to the desired 50 psi (and filling the pressure tank on the way), then slowed down again.  There was one more thing to check, though: the direction the motor was spinning.  Centrifugal pumps actually work with the impeller rotating in either direction, but they work much better with the impeller rotating in the intended direction.  The motor on my pump is a three-phase motor, and it's very common to have those rotate backwards.  Mine was, naturally. :)  Fixing that is a piece of cake: you just swap any two of the phases.  I did that, and started the VFD one last time – everything worked fine this time.  Once the pressure tank was charged, the VFD ramped down to 30 Hz and perfectly maintained 50 psi.  There was a bit of noise at the lower frequencies, so I called into Glenn's Electric (where I bought the pump) and got educated on the several possible sources of that noise.  All but one of them are benign and should disappear after a little use; the one bad possibility is a bad starter switch.  If the noise persists, I'll call them back and they'll swap out that switch.  It's very satisfying to me to have this fairly complex pump system all up and running properly.  It also seems kind of odd to me that I'm the first (at least, so far as Glenn's Electric knows) to put in a booster system like I have.  The usual solution is to have a full-time pump – and they're fairly expensive to run, so I'm surprised more people wouldn't opt for a run-only-when-needed system like I've installed...

Whenever I'm writing these days, it's on the computer – and there always seems to be a spelling checker operating.  When I type something that gets marked as a spelling error, but looks right to me, I always go look it up in my trusty OED.  Sometimes I discover that I actually did make a spelling error.  More often, it's a word that's in the OED, but the spelling checker didn't know it, so I add it.  That happened to me as I typed the word “ramped” in this post.  The OED's definition is at right (click to embiggen); it's really a perfectly good word, so I added it to the spelling checker. 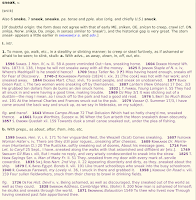 Another word I typed this morning (“snuck”) had a surprising OED page.  My first surprise was that while the OED lists “snuck” as the past tense of “sneak” (which I expected), it says that's chiefly an American usage! Everywhere else it's “sneaked”.  I can't recall another occasion when I've run across an English word whose root is the same in both British and American usage, but whose derivations are different.  There are probably 10,000 of them, but I never noticed it before...

I've been using the CD-ROM version of the OED for years now, and I'd call it an essential tool.  It's more expensive than many people would care to spend on a dictionary, though – you have to be something of a word nut to care that much. :)  When away from my computer recently, I discovered that there's a reduced (but still official) version of the OED online, and free.  Can't beat that!

I mentioned the other day that we had sighted a bird we didn't know, out by Miller's Ranch.  Debbie found it today, and it sure surprised me!  The photo at right is from the Audubon Society, and it's a year-old (“first summer”) red-winged blackbird.  I would never, ever have guessed that this was a blackbird!  It's so not black!!!
Posted by Unknown at (permalink) 7:51 AM 1 comment: