Paradise ponders ... homecoming in the wind edition...  We've got smiles on our faces around here, because our friend Tim D. is due home from the hospital any minute now.  His recovery went faster than anticipated, always a good sign.  He's up and walking around, but he does have rather severe limits on what he's allowed to lift: just 15 lbs. for the next year (though it's possible they'll relax that earlier if it's clear he's healed enough).  For a retired guy whose hobby is farming alfalfa on five acres, that's going to be tough.  So many things require lifting around a little farm like this, but most especially the irrigation pipes (which are in use roughly half the days from May through September, and which must be moved on each of those days) and hay for his two horses.  The hay Tim's wife Jeannie can handle, except when one of the big 1,200 lb. bales needs to be moved; for that, my tractor will do the trick.  The pipe moving we've started to organize some of the (many!) youths in Paradise, and me.  So good to know he's home and the surgery was successful!

Debbie and I had breakfast at Angie's this morning.  She had a “Santa Fe” skillet with chicken, I had eggs and ham.  Good, solid, delicious food as always.  It was fun to hear the locals talking about local things once again; the first time we've been immersed in that since our trip to Hawai'i ended.  I overheard the conversation at a nearby table, a middle-aged couple visiting Logan because they're considering moving here from Ogden.  They were raving about Angie's – they couldn't believe the quality of the food, not to mention the quantity, and the smiling, friendly service just blew them away. We're not far from Ogden, but the cultural difference really is quite large.  Ogden is much more the “big city” atmosphere, and service such as provided by Angie's would, I'm sure, really stand out.  But I think that only explains part of it – some of it is Angie's. I've met the owner, who's often around, talking with customers.  He's just like his staff – open, friendly, welcoming, interested, eager to please.  I'm sure that attitude and energy trickles down to all the staff, or at least all the staff who stay employed.  It's not that we get unfriendly service elsewhere in Logan, because we do with but rare exception.  What I'm really trying to say is that even here Angie's stands out.

Despite overly full belly ('cause there's no such thing as a small breakfast at Angie's so far as I can tell, and it's so good you're definitely going to want to eat it all!), I started working on the steps project that I bought lumber for yesterday.  There will be just two steps, 44" wide.  The upper step will be more like a landing, 36" deep, because the door from our house will open over it.  The other step will be about 11" deep.  Both of them will be roughly 3" thick, solid redwood.  I'm making them by gluing multiple 4x4s together, using dowels to get accurate joints.  The 4x4s come from the lumberyard with a roughly 3/16" radius to make rounded edges – a good thing for most purposes, but not for mine, as I want the top of the slab to be free of the grooves that would make.  So I'm planing all the 4x4s down on two opposite sides, to eliminate the radius.  That will reduce the thickness to roughly 3" instead of 3.5".

In the first photo below you can see the side I planed on the bottom, and the unplaned side (with the radius milling) on the top.  The second photo shows all eight of the 4x4s I need with one planed side (on the top).  These all measure 3.137" in thickness now, down from the roughly 3.4" (with lots of variance) as I received them.  This little exercise was a nice test of my planer, to see how stable its depth of cut was.  So far as I'm able to measure (0.001"), it's perfect – the first piece and the last piece both measure 3.137" thick no matter where I measure them.  A few hours from now, as the wood starts drying differently on the different pieces, that will no longer be true. :) 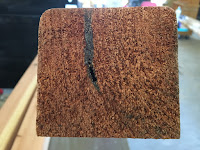 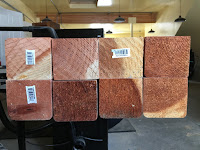 To plane all those 4x4s took a total of 24 passes through my planer, three for each piece.  Why?  Because the planer can only remove 3mm (a shade under 1/8") on a single pass.  So to chew off enough wood to remove the radius milling, it took three passes.  I'll have 24 more passes to take off the opposite side of each 4x4.

When I finished that first side on all of them, I decided to take a break.  I went to shut off my dust collection system and saw that the collection barrel was over-full (see first photo below).  Oops! I've only emptied this barrel twice since installing it almost two years ago.  Most of what I do doesn't make all that much sawdust.  But the planer is an entirely different story: it removes a lot of wood, and fast – in fact, that's it's entire job.  The second photo shows what I saw after I removed the lid and cleared the “extra” chips from the transparent feeder tube.  Those are all redwood chips on the top from the planing I did this morning.  I reached down into the chips to see where the redwood started – and discovered that 2/3s of the barrel are redwood chips from this morning.  I'm going to have to pay closer attention to that system when planing! :)

The wind is howling outside.  We have an average wind speed of 28 mph predicted for later this afternoon, and I think it's probably around 20 mph average right now (though some gusts are clearly much higher speed than that).  The temperature is 53°F right now, about like yesterday, and between the wind and the heat our snow cover is melting very rapidly.  Many fields are completely clear already.  But ... our forecast is showing up to 6" of snow over the next couple of days, so I'm not removing my snowplow from my tractor just yet... 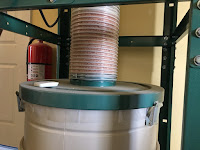 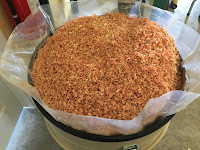 Posted by Unknown at (permalink) 11:20 AM No comments: