Bruce Schneier has a fascinating opinion piece up on, of all places, CNN.  A teaser:


That's the key question: How much of what the United States is currently doing is an act of war by international definitions? Already we're accusing China of penetrating our systems in order to map "military capabilities that could be exploited during a crisis." What PPD-20 and Snowden describe is much worse, and certainly China, and other countries, are doing the same.

All of this mapping of vulnerabilities and keeping them secret for offensive use makes the Internet less secure, and these pre-targeted, ready-to-unleash cyberweapons are destabalizing forces on international relationships. Rooting around other countries' networks, analyzing vulnerabilities, creating back doors, and leaving logic bombs could easily be construed as an act of war. And all it takes is one over-achieving national leader for this all to tumble into actual war.

It's time to stop the madness. Yes, our military needs to invest in cyberwar capabilities, but we also need international rules of cyberwar, more transparency from our own government on what we are and are not doing, international cooperation between governments and viable cyberweapons treaties. Yes, these are difficult. Yes, it's a long slow process. Yes, there won't be international consensus, certainly not in the beginning. But even with all of those problems, it's a better path to go down than the one we're on now.

Posted by Unknown at (permalink) 7:23 AM No comments:

They are under construction, and this site has some very cool photos of it:


I'd never heard of Elbert Guillory before. He's a state senator from Louisiana.  As I watched this video, I felt like jumping up and cheering – and finding the address where I can send this man a donation.

Do you harbor some lingering belief that government is the most efficient way to get big jobs done?  This story should cure you of that mental illness.

The outline:
Personally, I find this completely unsurprising.  Of course that's what happens; it's almost as if someone designed the program like that.

A business, operating with profit motive, would never behave in such a stupid and inefficient way with our tax dollars.  Only the government has that capacity.

Something for you to think about...  When you think of the tax dollars that you pay to both the federal government and the state government, what percentage of that do you think is utterly wasted (like above)?

Beauty on the Wing... 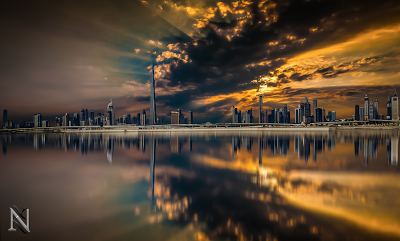 Reader, friend, and former colleague Doug S. passes along this site with beautiful photography.  The photographer is Karim Nafatni, a Dubai-based A320 commercial airliner pilot.  Many of his photographs (like the one at right) are taken from the cockpit of the airplane he's flying.  There's a story about him, and he has a web site with lots of photos.  Some gorgeous stuff here...
Posted by Unknown at (permalink) 6:58 AM No comments:

Goes to Niall Ferguson, one of my favorite authors, writing in today's Wall Street Journal ($?):


Tocqueville would not recognize America today. Indeed, so completely has associational life collapsed, and so enormously has the state grown, that he would be forced to conclude that, at some point between 1833 and 2013, France must have conquered the United States.

Later in the piece, he has one of my favorite Tocqueville quotes, and a great conclusion:


Tocqueville also foresaw exactly how this regulatory state would suffocate the spirit of free enterprise: "It rarely forces one to act, but it constantly opposes itself to one's acting; it does not destroy, it prevents things from being born; it does not tyrannize, it hinders, compromises, enervates, extinguishes, dazes, and finally reduces [the] nation to being nothing more than a herd of timid and industrious animals of which the government is the shepherd."

If that makes you bleat with frustration, there's still hope.

Do go read the whole thing...

I haven't read Ferguson's new book yet, but I will be reading it soon...
Posted by Unknown at (permalink) 6:51 AM No comments: