Evening walk in Paradise...  Just Miki, Race, and I tonight.  I let Mo'i wander about in our back yard at his own pace, stopping when he needs to.  The three of us marched at a quick pace a little over a mile (with 300' elevation gain) to an abandoned quarry, and back.  Normally on these walks, paced by Mo'i, my muscles don't even notice it.  Tonight I can feel a little burn in my quads and calves.  It's a good thing!  Or at least that's what I'm told...

The photos below are from that walk.  The first one is looking to the southeast from right near that quarry.  In the foreground is the corner garden I took photos of earlier.  In the background is the home of the gardener, about 3/4 mile away.  That family owns a couple thousand acres of prime hay fields in this area, and they plunked their home right down in the middle of it.  I haven't met them yet, but I can tell they're probably my kind of people :)  The second photo is a panorama looking due west.  I was trying to capture the 22 visible strings of irrigation lines all running right now.  Most of the alfalfa fields have now had their first cutting, so sunshine and water are the farmer's primary objectives.  They want a nice growth burst for the second cutting – and this year, they're getting it in spades.  The last photo is take slightly north of west, showing part of what's in that panorama – but bigger.  You can't see all 22 strings in that photo, but you can pick out 17 if you try really hard.  There's a lot of water being squirted around right now!  Click to embiggen. 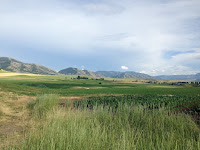 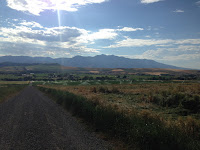 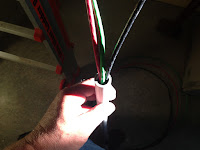 One of my readers had the gall to email, complaining that he couldn't understand the diagram I published earlier.  He wanted a photo.  Ok, here's your photo (at right).  I took this photo before I had the brilliant idea of taping the wires together in the correct orientation; at this point I was orienting them by hand, very tediously.

I finished wiring up the air compressor today, both the 240 volt circuit and the 120 volt circuit.  I also capped off the output so we can test the pressure tank when the technicians go through the startup testing (hopefully later this week).

I have an appointment for this Thursday to have my tooth root-rootered, or possibly yanked if it's damaged beyond repair.  If they do yank it, it will be the first tooth (not counting my deliberately removed wisdom teeth) that I've ever actually lost.  I'm hoping that's not required...

Another set of neighbors (Gary and Elaine S.) came by today to see Debbie.  This community is kind of amazing this way.  We just barely know Gary and Elaine.  They live on the other side of the highway from us and probably because of that we don't have much contact with them.  Our previous contacts with them have mostly been waving and saying “hi”.  Today they came over and stayed with Debbie for an hour, and Elaine promised to come by a few times a week – and to bring us a dinner tomorrow night.  They came by because they'd heard from another neighbor (Tim D.) that Debbie was ailing, and that was all the nudging it took for them to take the initiative to see if we needed any help.  They behaved exactly the way you'd expect a good friend to behave.  What a place we landed it!
Posted by Unknown at (permalink) 5:49 PM No comments: 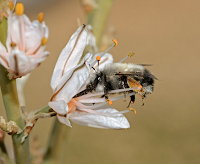 Asphodelus aestivus...  Common name: summer asphodel.  The bee ain't bad, either!  Via BPOD, of course...
Posted by Unknown at (permalink) 4:09 PM No comments:

Morning in Paradise, in the shadow of the mountain edition...

Morning in Paradise, in the shadow of the mountain edition...  Took the two younger dogs (Miki and Race) out for our morning perambulation.  Mo'i isn't feeling too well after pooping all over the kitchen; he's resting up for his next adventure.

I took the first photo below as we were walking to the east, away from home.  The sun is just below that minor peak in shadow.  The sky is lit up brightly because technically it's after dawn.  The official dawn starts when the sun peeks above the theoretical horizon – where the horizon would be if there were no mountains.  This almost never occurs in the real world on land, but on the sea it happens all the time.

The second photo was taken about 10 minutes later, as we were headed downhill and west, toward home.  The sun is at our back, but we're deep in the shadow of that silhouetted peak.  To the right of the dirt road you can (barely) make out the alfalfa field that was mowed 11 days ago.  It's now around 15" high, so that alfalfa is growing at just over 1" per day.  In the distance you can see the Wellsville Mountains all lit up, and below them the nearby foothills – they're about a mile and a half from where I was standing.  They're all lit up as well, and you can see very nicely how all the fields with their different kinds of grass, forage, or grain have changed in appearance from the similar photo I took about a month ago.  Many of the fields have been mowed now, and a few have even been plowed and replanted. 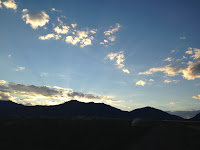 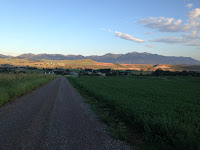 The rainstorm yesterday delivered 0.55" of rain, according to my rain gauge.  That's a bit more that forecast, and very welcome.  We have three more days with roughly a 50% chance of rain in the forecast, so we might get even more.  That sound you hear is all the local farmers cheering.  Except, of course, for those who just mowed their fields.  They've now got soppy windrows that will have to dry for several days before they can bale...
Posted by Unknown at (permalink) 5:58 AM No comments:

Floating point follies...  I ran across this blog post in my morning reading, and as I was reading it I thought “Jeez — this is like a litany of all the floating point problems I’ve seen programmers stumble into!”  Two memorable occasions:

Posted by Unknown at (permalink) 5:04 AM No comments:

Bullwinkle...  Our neighbors have named the moose who visited us a couple days ago.  Here's a photo Alan L. took with an actual camera, showing Bullwinkle in our alfalfa/grass field: 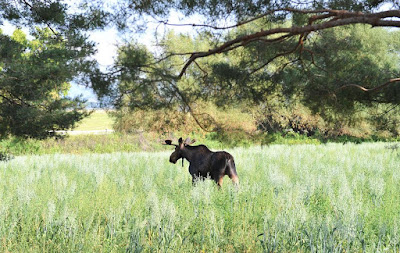 To the voters of America...

To the voters of America... 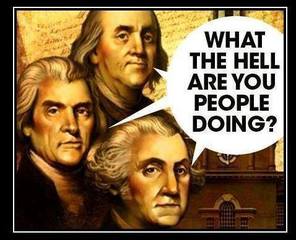