Well, not really – Snopes says it's fake, and has been rewritten for other countries as well.  But the snide answers are still funny as hell.  Via my faithful reader and mom:

Posted by Unknown at (permalink) 1:10 PM No comments:


In the beginning, God created the Heavens and the Earth and populated the Earth with broccoli, cauliflower and spinach, green and yellow and red vegetables of all kinds, so Man and Woman would live long and healthy lives.

Then using God's great gifts, Satan created Ben and Jerry's Ice Cream and Krispy Creme Donuts. And Satan said, "You want chocolate with that?" And Man said, "Yes!" and Woman said, "and as long as you're at it, add some sprinkles." And they gained 10 pounds. And Satan smiled.

And God created the healthful yogurt that Woman might keep the figure that Man found so fair. And Satan brought forth white flour from the wheat, and sugar from the cane and combined them. And Woman went from size 6 to size 14.

So God said, "Try my fresh green salad." And Satan presented Thousand-Island Dressing, buttery croutons and garlic toast on the side. And Man and Woman unfastened their belts following the repast.

God then said, "I have sent you heart healthy vegetables and olive oil in which to cook them." And Satan brought forth deep fried fish and chicken-fried steak so big it needed its own platter. And Man gained more weight and his cholesterol went through the roof.

God then created a light, fluffy white cake, named it "Angel Food Cake," and said, "It is good." Satan then created chocolate cake and named it "Devil's Food."

God then brought forth running shoes so that His children might lose those extra pounds. And Satan gave cable TV with a remote control so Man would not have to toil changing the channels. And Man and Woman laughed and cried before the flickering blue light and gained pounds.

Then God brought forth the potato, naturally low in fat and brimming with nutrition. And Satan peeled off the healthful skin and sliced the starchy center into chips and deep-fried them. And Man gained pounds.

God then gave lean beef so that Man might consume fewer calories and still satisfy his appetite. And Satan created McDonald's and its 99-cent double cheeseburger. Then said, "You want fries with that?" And Man replied, "Yes! And super size them!" And Satan said, "It is good." And Man went into cardiac arrest.

Then Satan created HMOs and is now working on OBAMACARE.

The devil you say!
Posted by Unknown at (permalink) 12:52 PM No comments:

Posted by Unknown at (permalink) 10:39 AM No comments:

It's sunny and cool (just 67°F as I write this) here; a simply gorgeous day.  I played the video below just a few minutes ago and greatly enjoyed it; I hope you do as well...

Posted by Unknown at (permalink) 10:27 AM No comments:

John Byrnes' Chaocipher has long intrigued cryptanalysts, mainly because how it worked was never revealed and nobody could be sure that it was even real.  That has now changed: the entire system is now in the public domain, and it's both real and clever...
Posted by Unknown at (permalink) 8:13 AM No comments:

What do you get when you combine a cell phone with a camera, a few LEDs, and some very clever software?  A biological microscope, that's what.

Aydogan Ozcan's fiendishly ingenious idea is to use the processing power of the computer in modern cell phones to analyze an image taken with special side-lighting to create the equivalent of an expensive microscope for just a few dollars worth of plastic and LEDs.  Bravo!
Posted by Unknown at (permalink) 8:09 AM No comments: 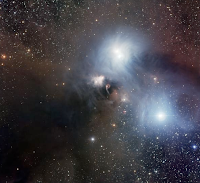 From the Wide Field Imager at La Silla...
Posted by Unknown at (permalink) 8:04 AM No comments: 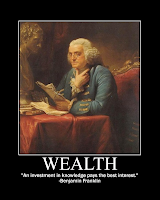 A great collection of motivational posters like the one at right, from The Art of Manliness...
Posted by Unknown at (permalink) 8:02 AM No comments:

Labels: Poster of the Day

The Economic Distortion of Criminalization... 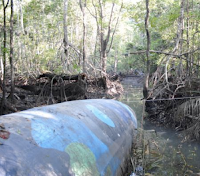 The DEA helped Equador locate and confiscate a 30-foot long submarine in the jungle near the border with Columbia. DEA Andean Regional Director Jay Bergman said in a statement: “The submarine’s nautical range, payload capacity and quantum leap in stealth have raised the stakes for the counter-drug forces and the national security community alike.”

So the drug lords are financing the design and clandestine construction of a sophisticated, high technology, stealth submarine to deliver tons of cocaine to the U.S. market.  That can't be cheap – millions of dollars, certainly.  This only makes economic sense because cocaine is an illegal substance.  Take away the legal issue and transporting cocaine on high-tech submarines would be ridiculous.  It's very reminiscent of what happened during Prohibition – the high-tech of the day was liberally deployed in alcohol smuggling, and on a very similar scale (in economic terms).  The only interesting difference is that the physical volume of modern day illegal substances is much smaller than the physical volume of alcohol.

It's time to reconsider our drug criminalization laws.  Their only real beneficiaries are the drug lords and their submarine designers...
Posted by Unknown at (permalink) 7:58 AM No comments:

It's still just us, in the United States.  But maybe someday everyone will be able to celebrate their freedom from tyranny...

Flag for the Fourth...