What could I possibly add to this?

Posted by Unknown at (permalink) 11:20 AM No comments:

I first started reading about sprites (aka “red lightning”) just a few years ago.  Now I'm starting to see good photos of these spectacular natural phenomena, like the one below.  I'd love to see one of these myself! Just when I thought we might be reaching the end of the scandalous disclosures about the NSA, I read about this new outrage.

...that this becomes reality.
Posted by Unknown at (permalink) 7:41 AM No comments:

The media is reporting that some kind of settlement – details to be private until sometime after Friday – has been agreed with Filthy Filner.  The media seem to be presuming that the settlement includes Filthy's resignation, but at the same time (so far as I can tell) the settlement includes just one of his victims (the one at the center of the suit against the city).  So I'm still holding out hope that resignation is not included, and that the Filthy entertainment will go on...
Posted by Unknown at (permalink) 7:40 AM No comments:

You Know the Teacher was a Guy!


Students in an advanced Biology class were taking their mid-term exam. The last question was, 'Name seven advantages of Mother's Milk.' The question was worth 70 points or none at all.

One student, in particular, was hard put to think of seven advantages However, he wrote:

1) It is perfect formula for the child.
2) It provides immunity against several diseases.
3) It is always the right temperature.
4) It is inexpensive.
5) It bonds the child to mother, and vice versa.
6) It is always available as needed.

And then the student was stuck. Finally, in desperation, just before the bell rang indicating the end of the test, he wrote:

7) It comes in two attractive containers and it's high enough off the ground where the cat can't get it.

Posted by Unknown at (permalink) 7:34 AM No comments: 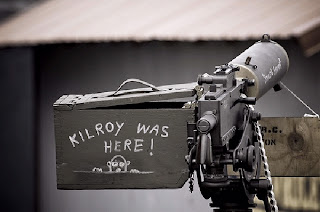 Any American (and many others) who lived through World War II will instantly recognize the image at right.  Though the war was before I was born, I've become very familiar with this image through my reading of history – the “Kilroy was here” tag and cartoon crop up time and again.  I've read about it in the U.S., in the European theater, and in the Pacific theater.  It's in many novels and essays of the era.  It's a World War II meme, one that somehow propagated throughout the world, wherever Americans went, without the help of the Internet.  I've never seen a good explanation for where the phrase came from, though I've read several conflicting accounts.

Yesterday my cousin Mike D. forwarded a plausible sounding explanation for the origin of the “Kilroy was here” meme (I've pasted it below).  This prompted me to go look, for the first time in probably 20 years, to see what was known about it.

First, of course, I googled the phrase – and got almost 400,000 hits.  The place you'd expect to see this were all represented: Wikipedia, Snopes, and of course The Straight Dope.  There was also a link to a “Legends” page on a site named www.kilroywashere.org (with a terrifyingly bad home page!).

I can't say that it looks like consensus amongst these sources, though there certainly is a generally consistent mention of James J. Kilroy, as in the story my cousin forwarded.  There are many differences in the details, though.

I suspect we'll never know for sure how it got started.

Here's what my cousin Mike forwarded:


He is engraved in stone in the National War Memorial in Washington, DC- back in a small alcove where very few people have seen it. For the WWII generation, this will bring back memories. For you younger folks, it's a bit of trivia that is a part of our American history. Anyone born in 1913 to about 1950, is familiar with Kilroy. No one knew why he was so well known- but everybody seemed to get into it.

So who was Kilroy?

In 1946 the American Transit Association, through its radio program, "Speak to America ," sponsored a nationwide contest to find the real Kilroy, offering a prize of a real trolley car to the person who could prove himself to be the genuine article. Almost 40 men stepped forward to make that claim, but only James Kilroy from Halifax, Massachusetts, had evidence of his identity.

'Kilroy' was a 46-year old shipyard worker during the war who worked as a checker at the Fore River Shipyard in Quincy. His job was to go around and check on the number of rivets completed. Riveters were on piecework and got paid by the rivet. He would count a block of rivets and put a check mark in semi-waxed lumber chalk, so the rivets wouldn't be counted twice. When Kilroy went off duty, the riveters would erase the mark.

Later on, an off-shift inspector would come through and count the rivets a second time, resulting in double pay for the riveters.

One day Kilroy's boss called him into his office. The foreman was upset about all the wages being paid to riveters, and asked him to investigate. It was then he realized what had been going on. The tight spaces he had to crawl in to check the rivets didn't lend themselves to lugging around a paint can and brush, so Kilroy decided to stick with the waxy chalk. He continued to put his check mark on each job he inspected, but added 'KILROY WAS HERE' in king-sized letters next to the check, and eventually added the sketch of the chap with the long nose peering over the fence and that became part of the Kilroy message.

Once he did that, the riveters stopped trying to wipe away his marks. Ordinarily the rivets and chalk marks would have been covered up with paint. With the war on, however, ships were leaving the Quincy Yard so fast that there wasn't time to paint them. As a result, Kilroy's inspection "trademark" was seen by thousands of servicemen who boarded the troopships the yard produced.

His message apparently rang a bell with the servicemen, because they picked it up and spread it all over Europe and the South Pacific.

Before war's end, "Kilroy" had been here, there, and everywhere on the long hauls to Berlin and Tokyo . To the troops outbound in those ships, however, he was a complete mystery; all they knew for sure was that someone named Kilroy had "been there first." As a joke, U.S. servicemen began placing the graffiti wherever they landed, claiming it was already there when they arrived.

Kilroy became the U.S. super-GI who had always "already been" wherever GIs went. It became a challenge to place the logo in the most unlikely places imaginable (it is said to be atop Mt. Everest , the Statue of Liberty , the underside of the Arc de Triomphe, and even scrawled in the dust on the moon.

As the war went on, the legend grew. Underwater demolition teams routinely sneaked ashore on Japanese-held islands in the Pacific to map the terrain for coming invasions by U.S. troops (and thus, presumably, were the first GI's there). On one occasion, however, they reported seeing enemy troops painting over the Kilroy logo!

In 1945, an outhouse was built for the exclusive use of Roosevelt, Stalin, and Churchill at the Potsdam conference. Its' first occupant was Stalin, who emerged and asked his aide (in Russian), "Who is Kilroy?"

To help prove his authenticity in 1946, James Kilroy brought along officials from the shipyard and some of the riveters. He won the trolley car, which he gave to his nine children as a Christmas gift and set it up as a playhouse in the Kilroy yard in Halifax, Massachusetts.

Posted by Unknown at (permalink) 7:32 AM No comments: