At last, the digiscoping adapter...

At last, the digiscoping adapter...  If you're crazy enough to be a long-term reader of this blog, you may remember that I bought a very nice spotting scope some time ago.  My intent was to use a digiscoping adapter with it to let me take (fairly extreme) telephoto shots of wildlife using my iPhone X.  Such a great plan!  Unfortunately, Swarovski (the maker of the spotting scope) failed to cooperate by making a digiscoping adapter for the iPhone X.  Had I selected any other model of iPhone, they had me covered.  I've been waiting ever since for them to catch up with my iPhone.

A few days ago, I did my tenth or eleventh search for the adapter – and still Swarovski isn't making one.  But then it occurred to me that there might be a third party maker – and I found one right away!  Interesting twist: they're located just south of Salt Lake City, practically in my backyard.

So I ordered an adapter for my scope and iPhone X, and also a Bluetooth shutter release for my iPhone (so I wouldn't have to tap the screen and vibrate the scope to take a photo).  The adapter works great!  I went out this afternoon and did a little test shooting on our feeders.  Some of the results below.  On all of these photos, I was between 15' and 20' away from the feeders.  The second photo, of the yellow jacket, was at a range of 17' – not bad detail for that distance!  I like the fifth photo where you can see the goldfinch's tongue, and the last one where you can see how far down the hummer's beak extends... 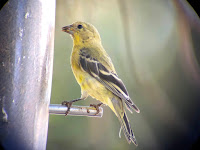 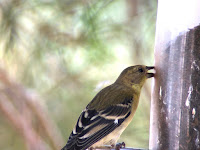 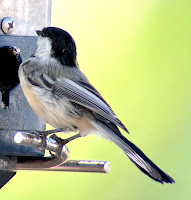 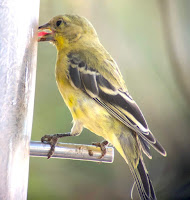 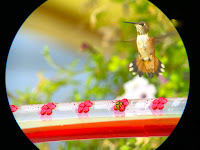 Posted by Unknown at (permalink) 3:20 PM No comments: 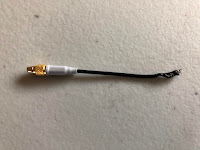 The drone saga continues...  This morning I successfully attached the new propeller motor to my drone.  However, as I started reassembling the dozen or so parts I had to remove to get to the motor, I managed to put one back incorrectly.  The result was to smash and slice the teensy coaxial cable for the antenna that's mounted inside the landing leg (one segment at right).  Upon discovering that fact, I'm afraid my language for the next 30 minutes or so was most inappropriate for the Mormon community that I live in.  I'm fairly certain that many of the words and phrases I used are completely unknown to these folks.  Fortunately, I was alone at the time. 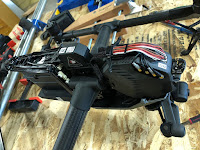 My first thought was that I'd buy the replacement part from DJI (the drone's manufacturer) and just replace the whole thing.  Turns out there are two problems with that idea.  First problem: I'd have to disassemble most of the drone to do it.  I figured this out by taking the top off the drone to expose the wiring (at left).  That antenna cable starts as one of the four gold connectors at the right-center of the photo.  Then it's threaded through a braided protective sleeve, which is in turn threaded through the carbon-fiber frame.  I'd have to disassemble the entire left side of the drone to thread the new one in – and then I'd have to successfully reassemble the whole mess without breaking anything.  I'll avoid that risk, if possible!  Second problem: DJI won't sell me that part.

So where does that leave me?  Well, I discovered that the coaxial cable is a standard type called RG-178.  So I ordered a 15' length of that, and then I'm going to attempt to splice a couple of inches into the antenna cable to replace the part that I smashed and sliced.  This is going to be a bit of a challenge, as that cable is just 0.072" thick (less than a tenth inch!).  It will be microscope and fixture time, 'cause my hands aren't going to be able to do it.

And if I fail with that repair?  Fortunately for dummies like me, DJI has a mail-in repair service.  I can throw the drone in it's shipping container and send it back to them to be fixed.  If I have to do that, I'm guessing I will be the source of the day's entertainment for the techs...
Posted by Unknown at (permalink) 3:01 PM 2 comments:

The rewards of direct charity... 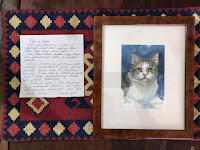 The rewards of direct charity...  I've mentioned before that we've switched our charitable giving to direct charity – no organization like United Way in between us and the people or animals we're helping.  Not long ago, we funded some surgery on Yoda (a cat) that her owner couldn't afford.  Yoda's owner has no idea who we are (our desire), but she knew that the vets who did the surgery did know.  It turns out the owner is a talented artist.  As a thank-you to us, she painted this delightful little watercolor of Yoda, and a note giving a bit of Yoda's background.

This isn't the first feedback we've gotten, and each time we get some it reinforces our commitment to this style of direct charity.  We know our charitable giving is going exactly where we want it to, because we know exactly what it's being spent on.   That's a vast improvement over what we used to do all by itself.  But even better, once in a while something like this happens and just makes our ability to help all the sweeter...
Posted by Unknown at (permalink) 2:44 PM No comments:

Debbie had a hankering...

Debbie had a hankering ... for Mexican food today, so we had lunch at La Unica, our favorite Mexican food restaurant in Cache Valley.  Debbie had the rolled tacos (one of their specials), and I had a carnitas burrito smothered in enchilada sauce.  Both outstanding, as always.  And now we're in a Mexican food coma... 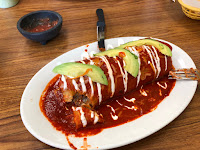 Posted by Unknown at (permalink) 2:35 PM No comments:

Cache Valley geology...  Here's a (very) basic introduction.  The Lake Bonneville part is the most relevant to anyone trying to understand the landforms visible from the valley floor...
Posted by Unknown at (permalink) 2:26 PM No comments: