I love this photo, but you might not see why at first blush. :)  The photo is undated.  In my mom's handwriting, on the back it says “Dad with a big one!”.  It's written with a fountain pen, something I don't recall my mom ever using.  The man in the photo is her dad, my grandfather, Donald MacLaughlin.  He looks young there compared with most of my memories of him, so I suspect the photo dates from roughly 1950, give or take 5 years or so.  Now why do I love this photo?  Because it's fake!  If you look carefully at the fish, you'll see that it is a halftone image (made of little dots).  That means it was printed on an offset printing press, most likely for a magazine or newspaper.  Someone cut out that fish and glued it to the photograph!  That's how they Photoshopped photos, back in the day.  It's also the kind of jest my grandfather would have enjoyed, whether he did it himself or someone did it to him. :) 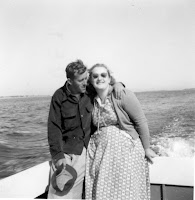 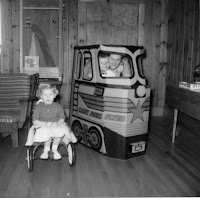 Oh, man, did this photo bring the memories pouring back in!  The lab dates it as December 1958, and it's clearly taken at Christmas time.  My mom wrote on the back “one of our poorest but one of the best Christmases” My sister Holly is sitting on something wheeled – I think it's a toy tractor, and she's sitting on its seat, but facing rearward (so the tractor is mostly hidden behind her).  I'm grinning from the cab, next to my mom.  I'm wearing a bow tie, which seems very weird to me – I don't remember us getting dressed up at Christmas time.  The location is our living room, looking to the east.  Our rarely-used front door is behind the cardboard locomotive.  Over Holly's head you can see the cage that held our pet flying squirrel.  Somehow we caught the thing; I've forgotten how.  I'm not sure how long we had that flying squirrel, but I remember him whizzing around in the cage.  Looking at it now, I don't believe my dad could have made it – the joints are square and straight, and the screws or nails are evenly spaced.  Can't have been him! :)  That makes me wonder who the heck did make it.  To the right of the cardboard locomotive is a family treasure, though it doesn't look like much.  It's a table made from the wood of American holly (Ilex opaca) trees, a very white and fine-grained wood.  It's a rare holly tree that has an straight wood in it, even the trunk is usually bent.  It's also rare for them to have trunks more than about 6" in diameter.  I don't know where they found the wood to make that table, though my dad once told me that it came from our farm and from specimens in the New Jersey pine barrens.  Holly now has that table in her home.  On the table is a clock I remember, the kind with a spring pendulum behind glass on its bottom, twirling to and fro to regulate the clock.  I've no idea whatever happened to that.  The chair to the left of Holly I remember very well, though not with those cushions (the ones I remember were solid green).  That cardboard locomotive I also remember, as well as the sounds of dad putting it together.  On Christmas Eve (we opened presents on Christmas morning), when we were pretending to try to sleep, I could hear dad being quite unhappy in the basement, trying to understand the assembly directions for that locomotive.  Building a kit was not the kind of thing he had much practice at. :)  Years later, on one of our trips, he told me that at several points during the night he was so frustrated that he nearly threw the damned thing out.  There were several points where he simply gave up on the directions and just held it together with tape and staples.  It was perfect so far as us kids were concerned. 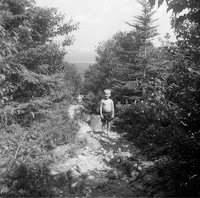 That's me at left, on a hike in (I think) Maine, almost certainly with my dad (and I'm assuming that he took the photo).  The lab dates it to December 1958, but clearly it was taken in the summertime.  They must not have developed the photos for a few months (taking photos on actual film sure was a different kind of experience than we have today with digital cameras!).  Most likely this was taken between June and August of 1958, when I'd have been almost six years old.  We're on a low mountain or big hill, and you can see a lake in the background, along with some other mountains.  We kids, especially my brother Scott and I, went on dozens and dozens of hikes with my dad over the years, up through 1957.  It's a core part of our family life, more than any other family I've ever run into. 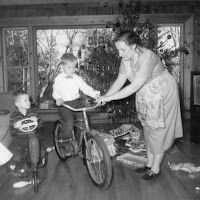 This is another photo of our 1958 Christmas, dated December 1958 by the lab just like the third one in this post.  My mom wrote “The first 2 wheeler” on the back.  That's me on the bicycle, and my brother Scott on the tractor.  We're in the living room, looking west out of our beautiful picture window.  I'm sure if my mom wasn't holding me up, I'd fall right over.  Look at the wheels and tires on that thing!  It looks like a truck.  I wonder what that beast weighed?  We used bicycles a lot on the farm, and before I got a car in the late '60s I drove my bicycle all over central and southern New Jersey (it's not that big a place :).  I can't get over the fact that I'm wearing a bow tie!  There's a sad looking doll face-down on the floor, and bowling pins – I don't remember them at all! 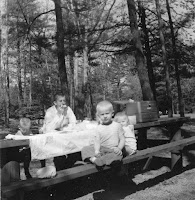 Finally, here's an undated photo of my family at a picnic.  From our ages, I'll guess this was taken in the summer of 1957, when I was four, Scott three, and Holly two.  Left-to-right it's my brother Scott, my dad, me, and my sister Holly.  Presumably my mom took the photo.  We're in tall pines somewhere; could be Maine or in the New Jersey pine barrens.  I remember that metal ice chest, built like the proverbial tank.  Didn't insulate worth a darn, though. :)  There are glass mugs on the table filled with water, standard for us.  Dad is shoveling some large piece of food into his face, totally standard for him. :)  We had a lot of picnics like this...
Posted by Unknown at (permalink) 4:37 PM No comments:

No more than eight times?

No more than eight times?  Have you ever heard the claim that it's impossible to fold a piece of paper in half more than eight times?  Allegedly it doesn't matter how big the paper is, how thin, or anything else.  I read that somewhere years ago, and dismissed it as nonsense with a simple thought experiment: if I took a long enough piece of paper, clearly I could fold it in half 9 times (at least).  For example, just to make the math easy, imagine that I had a piece of paper that was 1 meter wide by 512 meters long, and 0.1 mm thick.  Folded in half 9 times in the long direction, I'd have 512 layers, or 51.2 mm of paper thickness, each of these pieces roughly 1 meter square.  For you non-metric folks, that's roughly 2 inches thick by a yard square.

So with that thought experiment, I dismissed the claim as complete nonsense.

This morning I ran across a reference to a young woman (Britney Gallivan) who rather more formally debunked the claim.  That's her at right, with a piece of paper folded 11 times.  I'd not heard of her and her work before.  It's delightful!  Here are a couple of stories about it.  Even better, now if you search for "can't fold paper in half more than", you'll get all sorts of references to her paper.  She's famous, to a certain set of geeky folks.  :)
Posted by Unknown at (permalink) 2:24 PM No comments:

I took a peek ... at the stock market graph for today, and it looks remarkably like a noisy square wave displayed on an oscilloscope.  There were apparently four events that affected the markets in a roughly equal manner, and the timing was such that it resembles a square wave with a 50% duty cycle.  I don't remember ever seeing something like this before!

If what I just said makes no sense to you, don't worry about it.  It's sort of an electronics geek insider joke.  I'm not making any comment about the market here, just noting a strange coincidence.  I'm certain it means nothing of significance.  :)
Posted by Unknown at (permalink) 10:34 AM 2 comments:

Paradise ponders...  Yesterday morning, early, Debbie and I took a drive to Hardware Ranch and the 5M Ranch on the way to Ant Flats.  There were two highlights for us.

First, near the dammed lake on the way to Hardware Ranch we saw two moose: a mama and her baby.  Baby was about the size of a VW Bug, and mama most of a locomotive.  Those things are big.  They were south of the road about 200' when we first pulled up to watch, but within a minute or so they ambled off into the willows lining the river.  It was quite impressive how fast those two monsters totally disappeared into the cover.  For a little while we could see the willows twitching, then ... nothing.  You'd never know they were there.

Later, very close to Hardware Ranch itself, we saw a tiny little chipmunk very busy eating the seeds from mature grasses near his rock.  He'd climb up a stalk, bite off the seeds, then retreat to peel them all off and stuff them in his (tiny little) cheeks.  You might wonder why we'd be excited to see a chipmunk.  Here's why: squirrels and chipmunks are almost completely absent from the areas near us, as are rabbits.  We very occasionally see a rabbit up in the mountains, and even more rarely a squirrel.  This was the first chipmunk we'd seen since moving here two and a half years ago.  We can't figure out why this is true.  It looks to our eyes like rodent heaven here, both in the mountains and in the valleys.  It's a mystery to us.

Later in the day I made a new dish for us.  Besides tasting good, we're also trying to lower sodium and raise calcium.  I started with a steak, but used Mrs. Dash (zero sodium) seasoning instead of our usual salt-based seasoning.  Then I warmed up some corn tacos, mashed some avocado, chopped some Napa cabbage, and made a drizzle of sour cream, lemon, onion, oregano, and cilantro.  I sliced the steak into thin pieces.  All that made a nice taco kit, and we disappeared the whole thing.  Along with a can of low-sodium refried beans that were surprisingly good.  We weren't hungry for a while after that! :)
Posted by Unknown at (permalink) 7:47 AM No comments: