Progress in Paradise...  I was feeling pretty lazy yesterday, after the hard work the evening prior.  We slept in, skipped our morning walk (much to the dismay of the dogs!), and I didn't actually get out and about until almost 9 am – very late for me.

The afternoon before, Steve M. and I had emptied all the junk out of the building that we're tearing down.  That collection of stuff defies any attempt to describe it in a pithy phrase.  There's shelving in about 10 different styles, lots and lots of plumbing parts, an odd-shaped remnant of some gorgeous Berber carpet, two big, thick rubber pads, electrical parts, about 15 different kinds of liquids (oil, gas, paint, herbicides, pesticides, and completely unidentifiable!), a baseball bat ... you get the idea.  A major collection of junk.  So yesterday morning, I sorted through all that stuff, and threw away anything that seemed unlikely to be useful either to us or someone else.  That was about 80% of the stuff, by weight.  Then I loaded all those liquids (maybe 200 lbs. in total) into my pickup and hauled it all up to the Logan landfill.  This is a city landfill, but open to use by anyone in the county.  Associated with the landfill is a hazardous waste disposal facility.  Much to my surprise, it's free for households – any quantity at all of any kind of liquid – even mercury!  They also dispose of old electronics, batteries, and just about anything else you're likely to have at home.  All free.  This is ever so much easier and nicer than similar disposal was in California!

While I was up on Logan I took care of a bunch of chores that have been accumulating.  Amongst them was stopping in at a fuel supplier to see how much hassle and money it was going to take to get propane, gasoline, and diesel fuel storage at our place.  Answer: very little hassle (all are readily available and permissible, unlike in California), and about half the money I'd expected.  My plan is to put a propane tank along side the backup generator on the pad we're exposing by taking down the building.  This will be a fairly large propane tank, holding enough to keep the generator going for a few days.  Alongside those, I'm considering putting in a 250 gallon (or so) gasoline tank.  This will be very convenient for not only our cars, but also all the small engines I'm accumulating (seven at the moment) on lawn mowers, weed whackers, etc.  The price on delivered fuel beats the pump price by a few cents, but is just as volatile.  I'm also going to put in a much smaller propane tank and backup generator by the shed, mainly to ensure that the shed's heat is working even in a power outage.

I also stopped by a new (to us) bakery, recommended by a neighbor: Great Harvest.  This is a chain, with locations all around the country (including Charlottesville, Virginia, where my sister and mother live).  I bought a couple loaves of bread, which we haven't tried yet.  I also got a couple sandwiches, and Debbie and I really enjoyed them.  That place certainly was hopping!  I hope the bread is good, because since Crumb Brothers went out of business we've been missing that really good bread...

Yesterday afternoon Steve M. and his wife Janeel were back to continue the great outbuilding demolition project.  All three of us worked until about 8 pm (past my bedtime!), and we got quite a lot done.  We removed the garage door without damage.  All the roof trusses are removed and packed on his trailer, and Janeel got all the brackets holding the trusses removed in reusable condition.  Then Steve and I figured out how to separate the walls at the corners, proving it by completely loosening the front wall.  He tacked it back in place for the evening, and on Thursday he's bringing a small horde of young Mormon men to help load the walls onto his trailer.  At that point all that will remain of the project is cleanup, so I suspect he'll be all finished by Friday evening, exactly as he predicted (and faster than I thought!). 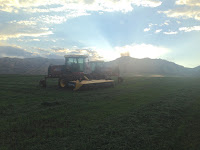 This morning Miki, Race, and I took our usual walk to the east.  We saw (and heard) lots of white-faced ibis, feeding in the soft soil under the sprinklers. 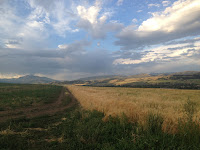 Right where we turned around, there were a couple of swathers parked, making a nice farmer's sunrise photo (at right).  A few minutes later, on the way back down, there was a nice play of early morning sunlight on the mountains to the south and west, while where we were walking was still in the shadow of the Wasatchs (at left).

This morning I have an appointment with our new GP, for a physical and just to get to know her.  Debbie and I had been seeing Dr. Dill in California for almost 25 years, so switching to a new doctor is a little intimidating.  GPs are becoming a rare breed in the U.S., especially independent GPs covered by our fancy new ObamaCare insurance.  We were unable to find an independent, so we signed up with a doctor who works with a clinic associated with the local hospital.  If we like her, that will be great.  Otherwise, I'm going to keep searching for an independent GP who (a) is accepting new patients, and (b) will accept our ObamaCare plan.  As my neighbor said, “Good luck with that!” He also told me that clinic-associated GPs were unknown in Cache Valley as recently as 5 years ago, and that independent GPs have been retiring or going out of business at a prodigious rate since then.  That's basically the same thing we saw in the San Diego area, with the old-timey Dr. Dill hanging in there and scraping by somehow.  Sad, that is...
Posted by Unknown at (permalink) 7:17 AM No comments: