It's a beautiful morning in Paradise... 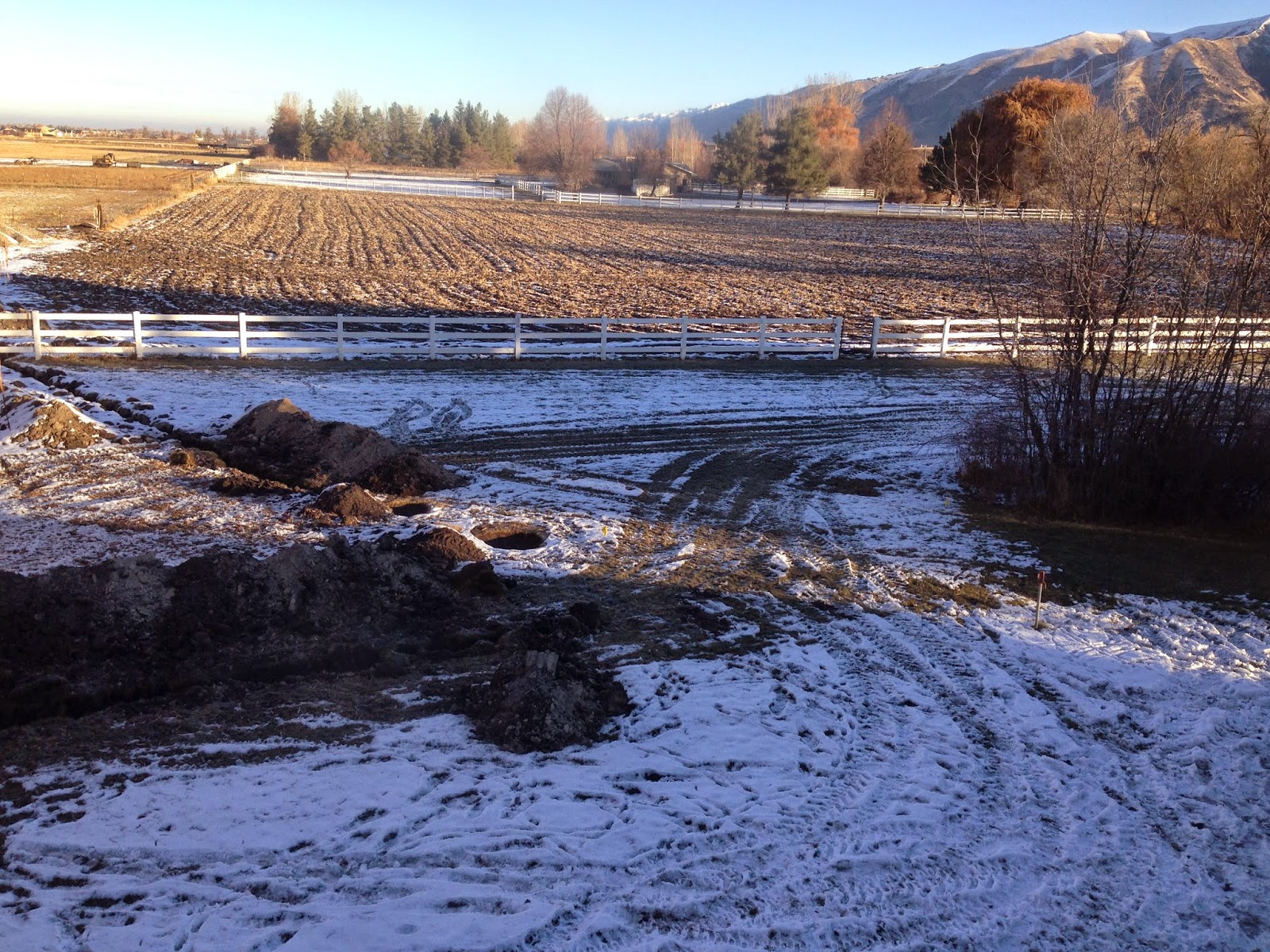 It's a beautiful morning in Paradise...  Right now (8:30 am) it's 28°F outside.  The forecast is calling for partly cloudy, no precipitation, and a high of 43°F today.  Tomorrow it says snow.  Lots of snow.  That could put a crimp in my trenching and pipe-laying...

In the photo (looking north from my house) you can see the trenches that are now making my back yard look like a WWI battleground.  Our back lawn is going to need some repair next spring...
Posted by Unknown at (permalink) 7:29 AM No comments:

The secret life of passwords...

The secret life of passwords...  This is a completely non-technical piece about how people choose passwords.  I found it absolutely fascinating, particularly the story of how Cantor Fitzgerald, with an assist from Microsoft, leveraged this knowledge to recover passwords lost when so many of their employees were killed on 9/11...
Posted by Unknown at (permalink) 6:41 AM No comments:

Obama's “amnesty”...  Several readers (including my brother Scott!) have already written me to see what I think about this.  I was rather busy yesterday (see earlier posts) and haven't had much time to digest this.  Nevertheless, here's a first take.

What did Obama actually announce?
So far as I can discern, that's what he actually said he would do.

The reaction of most of the talking heads has been predictably filled with breathless partisan doom-and-gloom rhetoric, making it challenging to actually find any facts in the mess.  The only semi-sober analysis I saw was this one from Reason.

The way that Obama did this is of a piece with the growth of unilateral presidential power ever since 9/11.  I think this may be the single biggest success of the terrorists on that day.  It strikes at the very heart of what makes this country America, and I fear greatly its long term consequences.  Obama's assertion of presidential power here, if not rebuked in some effective way, is one more step along the path blazed by George W. Bush.  So far, it's been a one-way path, with continuous movement of the boundary outward from the presidency at the expense of Congress.  This is the most worrisome thing I see about Obama's action, at least so far.

Politically this is a long-expected move by the Democrats, even if the form isn't quite was most people thought it would be.  This is a step toward (but not there yet!) a flood of new Democratic voters and the Democratic goal of a permanent majority.  At least, that's what Democratic strategists seem to believe.  I'm not so sure they'd actually get the results they wanted, though, even if they succeeded on the face of it.

What Obama just did seems rather mild compared to the rhetoric on the right, though.  They seem to see this as an irreversible step down a slippery slope to doom.  I see this more as a stupidly implemented, easily reversible step that should be a part of a much broader reform of our immigration policies.  I'm all for an actual amnesty (which this is not), one that applied to anyone who wasn't a felon, was actually working towards assimilation with American culture, and wasn't agitating for the overthrow of the U.S. government.  I'd also like to see our current immigration restrictions completely removed, as they were before the 1860s, back when that motto on the Statue of Liberty actually meant something:


Give me your tired, your poor,
Your huddled masses yearning to breathe free,
The wretched refuse of your teeming shore.
Send these, the homeless, tempest-tossed, to me:
I lift my lamp beside the golden door.

Emma Lazarus wrote that, and for about the first half of this country's history it was the literal truth.  Today's immigration controls have turned that motto from truth into a cruel, viscous joke – but nobody's laughing except the lawyers who take hopeful immigrant's hard-earned money knowing that there's little chance of success for them.

However, even someone as pro-open-immigration as I will not support actions like Obama's taken in isolation.  Those actions only make sense to me if they are part of a much broader set of reforms that include not only open immigration, but active deportation of felons and agitators, requirements for assimilation (including English and meaningful citizenship achievement), and more.  I don't see anything but bad consequences to piecemeal implementation over the course of years; this is something that really needs to be dropped into place quickly.  I've never thought this was politically feasible (and it certainly isn't now), so my default position is to oppose any significant change until real reform does become politically feasible.

There is one good thing I can think of that will come from Obama's amnesty: Congressional gridlock.  I think Obama just dropped a nuclear weapon on any possibility of cooperative Republicans.  It will be outright political war for the rest of his term in office.  Nothing will get done.  Yay!
Posted by Unknown at (permalink) 6:38 AM No comments:

“We will need writers who can remember freedom.”

“We will need writers who can remember freedom.”  That's a line from Ursula K. Le Guin's short speech upon acceptance of her Medal for Distinguished Contribution to American Letters at the National Book Awards a few nights ago.  The speech was pretty good, and it's worth a couple minutes of your time to read it and ponder.  Ms. Le Guin's work had a big impact on me in my youth, when I greedily devoured everything she wrote.  Earlier this year I've started reading some of her more recent works, and re-reading some of my favorites from the past.

I have just one quibble with that line from her speech.  We will need citizens who can remember freedom, not just writers.  But the writers might help those citizens remember...
Posted by Unknown at (permalink) 6:05 AM No comments:

Progress report: good, with a twist. 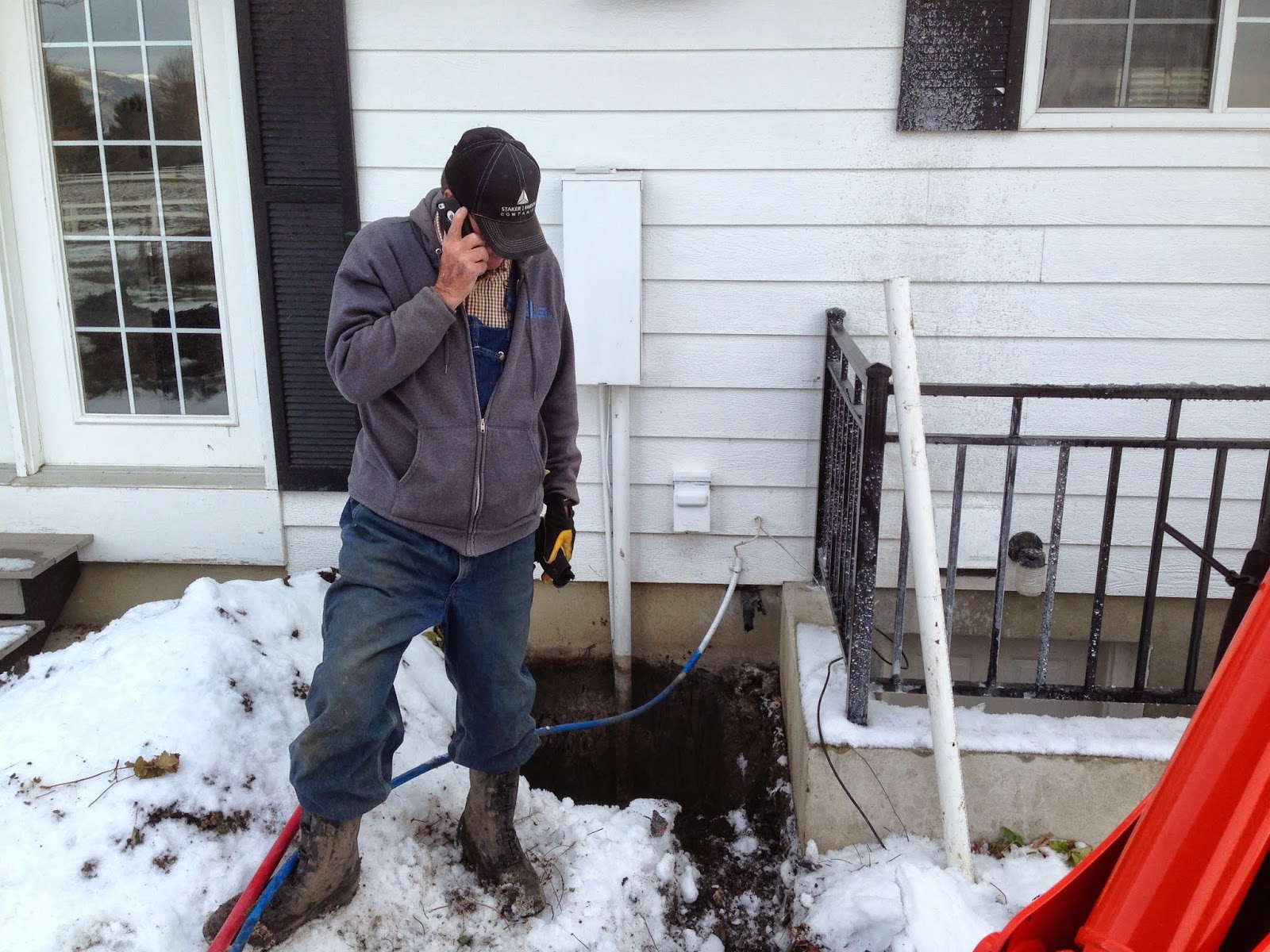 Progress report: good, with a twist.  With the able assistance of Tim D., my friend and neighbor, we made lots of trenching progress yesterday.  We were going so fast that we thought we'd actually finish yesterday.  Right about the time we had that thought, the twist: we struck a water pipe, about 2' in front of Tim in the photo at right, and quite close to our house.

Now the weird thing about this is that we were, at that point, being extremely careful about where we were digging.  The main water line into the house is directly behind Tim, about 4' below ground level.  The obvious course for it to take is straight out from the house, then left toward our pump house.  Just to the right of that, on the house wall, you can see where our electrical service enters the house.  For it, too, the logical route for it to take would be straight out from the house, then left toward the pump house, where our meter is.  Furthermore, when Trent J. hand dug here, he found that the power kept on going down after 4'.

So we dug with the backhoe to the right of all that, right next to the concrete wall for the entrance to our basement, just to the right (in the photo) of Tim's left foot.  In the area where we were most concerned, this all worked very well.

Then, most unexpectedly, as I started to lift out a chunk of dirt low in the trench, water started bubbling out.  Fast.  Very fast.  I got the backhoe's bucket out, gently, then ran to the pump house (about 200') and shut off our pump.  When I got back, Tim was out of the trench.  Fortunately, he was wearing overshoes, so his feet didn't get wet.  The trench had a couple feet of water in it.  And the house had no water.  It was 2 pm.

I already had a sump pump, purchased a few weeks ago for my last adventure in repairing our home's water supply.  We rigged that, and a few minutes later we had just a puddle left.  Tim insisted on jumping back into the trench and digging with a shovel in the muck (and I couldn't help feeling very guilty about that) while I operated the backhoe to remove what he'd dug out.  We soon discovered that at the bottom of the trench was a capped end of a galvanized steel pipe, and the water was coming in from the side of the trench.  Evidently the backhoe had moved that pipe, and broken it somewhere further into the dirt.  We had no idea how far into the dirt the break was.  I was dismayed to find the pipe was steel, as nothing is harder to repair.

So the two of us, shovel and backhoe, dug out a big hole to the side of our actual trench.  That went surprisingly quickly, though if I had been working on this alone it certainly wouldn't have.  The combination of Tim on the shovel and me on the backhoe worked well for this work, just as it does on the usual trenching.

Just a few inches from where we first spotted the leak was a valve – and it was turned off.  The valve, in turn, was broken off from the pipe beyond it.  We'd found the leak.  Tim dug a bit around it, removed the broken off valve and capped pipe, and we soon discovered the remaining pipe end was a 1" copper pipe.  Celebrate!  Celebrate!  Dance to the broken pipe!  Why?  Because copper pipe is a breeze to fix – all I'd need to do is to solder on a cap.  Woo hoo!

Tim, knowing I'd object, ordered me (I'm still laughing about this!) to run down to Ridley's (our local sort of large general store, four miles away in Hyrum) to buy the parts I'd need to fix it.  I also had to buy a propane torch, as mine is down in Jamul at the moment.  Ridley's had everything I needed, and just before 4 pm I had it fixed.  I cut a clean end (with a tubing cutter), cleaned it (wire brush and emery cloth), slathered it with flux paste, put the cap on, heated it up nicely, then soldered it.  The repair held without a drip on the first try.  It had been less than two hours from first break to repaired pipe.

It would have taken much longer without Tim's help, and almost certainly I'd have spent a night without water.  I'm beginning to wonder whether he's quite alright in the head, though – because even after today's experience, he's planning to come back and help me again today...
Posted by Unknown at (permalink) 5:40 AM No comments: