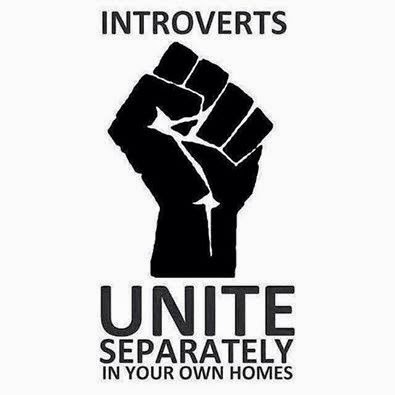 Introverts Unite!  Sent along by friend, reader, and proud papa of two prodigies (one a Google Engineer, the other a golf champion) Simon M...
Posted by Unknown at (permalink) 1:06 PM No comments:

“…and I want to thank you for being here.”

“…and I want to thank you for being here.”  That quote will make sense when you watch this video (from whence the quote comes).  But please make sure you've finished your drink before viewing...
Posted by Unknown at (permalink) 12:34 PM No comments:

“We have the temerity to exist at all, so we have it coming.”

“We have the temerity to exist at all, so we have it coming.”  Thus Judith Levy concludes a beautiful and heart-breaking Ricochet post about how she's feeling right now as a denizen of Israel.

It scares me that so many Americans are neutral on the Israeli-Palestinian conflict, even when that neutrality is mainly derived from ignorance.

It shakes me to my core when I hear Americans overtly taking the Palestinian side and advocating the demise of Israel, as I have now quite a few times (mainly from Californians).

Neither of these attitudes reflects my America.  Thankfully, neither is something I've heard yet in northern Utah.  I hope I do not ever hear it here.  There's a nearby university, though, so that hope will likely be dashed.

I have no answers.  Today, only sorrow.  It feels like grieving.

I can only hope that the Israeli people find the courage within themselves to resist the outside pressures to capitulate.  They must win convincingly against Hamas, or the only light in the entire Middle East will be extinguished...
Posted by Unknown at (permalink) 10:11 AM No comments:

SF fans – a fascinating post and comment thread on the current state of science fiction, over at Eric S. Raymond's place.

I've been a science fiction fan since the '60s.  In the last few years I've been mostly mining Amazon for past works that I've never read – because I found the vast majority of the modern works pretty, but uninteresting.  ESR articulates exactly this, in a detailed way that I simply don't have the intellectual tools to do.  In the process, he lists publishing houses and authors that may well provide me with a new source of reading material!
Posted by Unknown at (permalink) 9:34 AM No comments:

$840 million...  That's how much the federal government admits to having spent on the ObamaCare web site.  That is an absolutely incredible figure.  To anyone from the software industry (as I am), it is instantly clear that there is something terribly wrong here, because that number is at least an order of magnitude too high, and probably approaches two orders of magnitude too high.  If I were to guess at a “reasonable” figure for that web site's development, it would be something more like $10 to $20 million – and even that would be making allowances for government inefficiency.

Let's break that down a little bit to see why I immediately know that figure can't possibly represent a well-run project.  Let's assume we're hiring only American software engineers (which, it turns out, was not the case).  Let's assume we're hiring only well-qualified, experienced programmers (which, it turns out, was also not the case).  A guesstimate for the fully burdened cost (that is, salary plus benefits, etc.) of each such engineer would be about $160k annually.  Now let's assume one manager for every 5 engineers (there were actually nearly as many managers as engineers), and that their burdened cost was $200k annually.  There were three years of work.  How big a team would $840 million buy us?  That would be 4,200 software engineers, and a total of 12,600 engineer-years of work.

How much is that?  Well, it's more work that it took to build Windows, Microsoft Office, and OS X combined.  Each of those projects is clearly larger and more complex – and vastly more technically challenging – than the ObamaCare website and it's back-end.

From another perspective, though, it's not too surprising.  Large software projects are notoriously difficult to manage.  Like any veteran of the software industry, I can cite numerous examples of failed projects from my own personal experience.  Sometimes the failures are technical, sometimes business, sometimes management – or any combination of the three.  In a business, however, failures tend to get recognized and fixed relatively early, before the cost (relative to benefit) gets out of hand.  When the government is running the show, none of the usual business incentives to find and fix a problem early are in place.  Instead, there is a perverse opposite incentive, to keep the bureaucracy running – so the government's classic behavior in the face of a failed project is to throw more and more money at it.  I'd be willing to bet you that that's what happened here.

Virtually every development executive – no matter how bad – in every software company I've ever worked with would likely have done a better job, if given business-like incentives.

Hotel Viru...  I stayed here once, on one of the worst hotel experiences in my life (and I have a pretty good collection of personal hotel horror stories!).  The year was 1992 (I believe).  The hotel's management hadn't yet absorbed western ways; the experience was largely unchanged from Soviet times (which had ended just the year before), right down to the not-so-little old lady who sternly dispensed and handed out room keys in the hallway where my room was located.  The highlight: my bed.  It was made from a carefully stacked collection of thin, flat cinder blocks – each about the size and shape of a half-high shoe box.  There were no holes in them; they were solid blocks.  On top of this stack was a straw-filled “mattress”, roughly 2 inches thick.  Pieces of straw stuck through the mattress and the sheet, leaving me full of skin irritations in the morning.  I'm a civilized guy – sleeping on a pile of uncomfortable straw was not my idea of fun!

I was traveling with a colleague, who told me his room was ok.  Nothing to write home about, but perfectly acceptable.  We were there on a business trip, to meet with a small Estonian company that we were considering acquiring (we did).  Several people we met from that company told us of the KGB reputation of the Hotel Viru.  I felt as though I should be careful what I said, though I didn't really have anything to talk about that would be interesting to anyone at all, much less the KGB :)
Posted by Unknown at (permalink) 8:23 AM No comments:

This is hard to credit...

This is hard to credit ... until I remember how ignorant so many Americans are of where their food comes from.

On another level, it's very sad.  It's as if dairy farmers never ate cheese or yogurt, or wheat farmers never had bread...
Posted by Unknown at (permalink) 7:56 AM No comments: 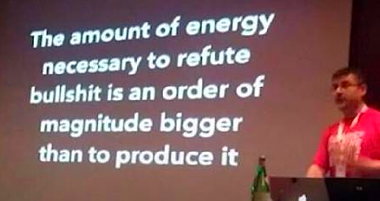 Bullshit is asymmetric warfare!  It's obviously true, but I never put the two thoughts together before.  It's no wonder there's so much bullshit in politics, then: it's a very efficient way to wage political warfare.  Just as it costs Hamas far less to attack Israel than it costs Israel to defend itself, a politician employing bullshit is going to spend far less than his or her opponent who is not.

This has led directly to our current situation, where virtually all of our politicians lead with the bullshit – in which case it's not asymmetric anymore...
Posted by Unknown at (permalink) 7:53 AM No comments: