A Recipe for Happiness...

Start with a stale crust of Dudley's Rosemary & Olive Oil bread.  Rip it into small pieces.  Warm a few tablespoons of milk in the microwave and soak the bread chunks in it.  Sprinkle a little shredded Parmesan cheese on it.  Stir in a tablespoon of melted butter.  Finely dice a slice of ham and mix it in.


Then put the bowl down on the floor for your old girl dog friend (in my case, Lea, our 15 year old field spaniel).  I guarantee you'll be a happier person after you watch your dog's delight and grunts of sheer doggie ecstasy. 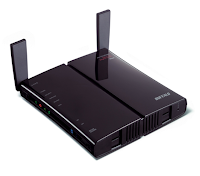 Recently the router (a 10 year old Cisco 806) that connected us to the Intertubes started having intermittent problems.  The symptoms were really quite annoying: it would work just fine for some period between 30 seconds and a week, then suddenly conk out completely.  To “fix” it, we had to power it down, wait a minute or so, then power it back up.

That annoyance has been removed.  I've replaced the venerable Cisco 806 with a Buffalo Technology model WZR-HP-G300NH (at right, click to enlarge), flashed with DD-WRT (open source router software).  This single $80 router replaces not only my malfunctioning Cisco 806, but also a separate Cisco wireless router.

So what was it like to replace that Cisco 806?

Installing the Cisco in the first place is something I remember well.  I was already reasonably familiar with the arcane Cisco IOS configuration files before I started that job.  Even so, to set up the 806 I had to learn a few new things.  It ended up consuming an entire weekend, and involved many failed attempts before I finally got us up and running on the Intertubes.  For months afterwards, I tweaked one thing and another until I finally got it all working.

Now contrast the more recent experience of bringing up the Buffalo Technology router.  There were just two steps.  First, I downloaded the latest DD-WRT version and flashed the router with it.  Elapsed time: about 10 minutes.  Then I used the built-in web pages to explore and configure the router.  Elapsed time: about 10 minutes.  Then I plugged it into power and the network, and … it all worked on the first try.  I've not had to do any tweaking at all.

Awesome job, DD-WRT folks.  Just awesome.  And much appreciated...
Posted by Unknown at (permalink) 7:10 AM No comments:

Lakes Entertainment is out with their latest financial report, and it's more of the same.  The Jamul Casino Project is showing no signs of progress (hooray!).  The company's stock price seems to be stuck in the doldrums, and their business overall looks much less than exciting.  As a Jamul Casino Project opponent, I can say that it looks quite hopeful that both the project and its sponsor are grinding their way, slowly, into oblivion.

Let's hope there's no rescue in the works...
Posted by Unknown at (permalink) 6:51 AM No comments:

The weather for the past week, and the forecast for the coming week, are both much cooler than the norms for this time of year.  Out here in Lawson Valley, we've been (and are forecast to be) seeing highs in the 60s and 70s (°F, of course).  The strange weather of our winter seems to be continuing.

The coolness sure is a nice change from the usual summer blast-furnace.  Debbie and I are hoping that this continues through the entire summer, though that seems a bit much to ask for...
Posted by Unknown at (permalink) 6:46 AM No comments:

Back On the Air!

Google's Blogger blogging platform (which this blog runs on) had some kind of disaster a couple days ago.  Some of my favorite blogs have been down (such as Althouse, whose blog is back up, but is missing 20,000+ posts!), and I've been unable to post from Thursday morning until this morning.  But we're back now!
Posted by Unknown at (permalink) 6:42 AM No comments: