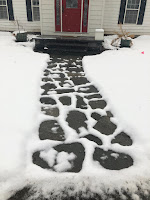 A slightly weird snowfall...  I spotted this pattern on our front door walkway when I was about to carry some groceries in.  Nearly all the areas of rock have melted, but the areas of sand/rock fines have not.  I'm going to guess, from this, that the larger thermal mass of the rock takes longer to drop below freezing (once warmed up) than the sand/rock fines areas – and so there was enough heat in stored up in the rock to melt the snowfall, but not so in the sand/rock fines.

What bothers me about my theory is that I haven't seen this before!

The groceries I was carrying in were a bit different than our normal fare.  Our local Boy Scout troop is having a food drive this week, specifically asking for canned goods.  When I took some cardboard up to Hyrum to be recycled this morning, I noticed that our local grocer was having a “case lot” sale on canned goods.  I'm sure it's not a coincidence that the sale is during the same week as the food drive.  It's easy to imagine here that the Boy Scouts were clever enough to hold their drive on the same week as the sale – but it's equally easy to imagine that the store manager decided to contribute to the food drive by holding the sale on the week of the drive.  However the coincidence happened, as I picked the canned fruit, vegetables, and meat I noted that all of the items on sale were of the right type for the food drive – and that all three of the other shoppers choosing with me were buying for the food drive as well...

We love living here!
Posted by Unknown at (permalink) 11:23 AM No comments:

That pesky white stuff again...  By yesterday afternoon our spell of warm, sunny weather had cleared nearly all the snow from the Cache Valley floor.  Then, last night, despite slightly-above-freezing temperatures, it started snowing again.  I got up around 1 am to let our dogs out, and there was three inches on the ground.  When we got up at 7 am this morning, there was just an inch of a mix of snow and slush, and the temperature was well above freezing.  We have rain and warmer temperatures forecast for today and tomorrow.  So it's all white outside (and it's still snowing), but none of this is going to stick.  I hope!  Our driveway had warmed up nicely, so there's no snow accumulating on it.  Snow plowing bullet dodged!
Posted by Unknown at (permalink) 8:19 AM No comments: