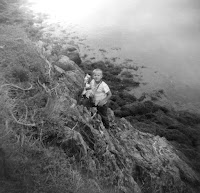 This photo isn't dated and has no note on the back.  It looks like me, around 7 or 8 years old, which would put it in '59 or '60.  The location looks like Acadia National Park (in Maine), though it could certainly be somewhere else as well.  I've got binoculars in a leather case slung around my neck; I remember these well.  They were certainly not the world's greatest binoculars, but we sure made good use of them!  Behind my right arm it looks like the detritus of a picnic, and that's exactly the sort of spot that my dad would have loved to hike to in order to eat and relax, perched at a good viewpoint from which to observe nature. 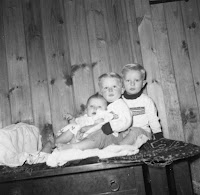 This photo is dated (by the lab) December 1955, and on the back in my mom's handwriting (fountain pen, again!) it says: “3 Gorgeous Kids”.  I think my mom might have been a bit biased in this judgment. :)  Left-to-right it's my sister Holly, my brother Scott, and me.  At the upper right in the photo you can just make out a wrought-iron strap hinge.  I remember these hinges, but I can't remember where they were in our house.  The knotty pine paneling means it was in our living room or a bedroom, but I can't think of any of those rooms that had a knotty pine door.

Here's another photo of Irene and Sliver Sturgeon, undated.  On the back, in my mom's handwriting: “Sliver + Irene Sturgeon, Lincoln, Maine”.  There's an out-of-focus kid in the background that I don't believe is from our family.  Behind the kid is my maternal grandfather, Donald MacLaughlin, with a characteristic cigarette dangling from his lips.  He smoked between three and five packs a day for many years; the consequent emphysema is what finally killed him in 1968.  I remember my mom receiving the phone call (I'm not sure from whom) to tell her that her father had died.  Her grief was piteous, and to me (at the age of 15) not entirely comprehensible.  It is much more so today. 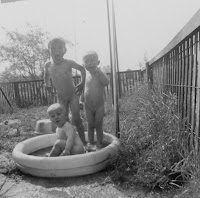 My parents would probably be arrested these days for hosting a party like this: three little boys, swimming in the nude in full public view!  This photo is dated June 1955 (by the lab).  In the back, in my mom's handwriting: “Jonathan, Tom + Scott”  That's my brother Scott sitting, my cousin Jonathan making a face, and me standing on the right.  I'd have been about two and a half, Scott about one and a half.  Jonathan is older than I am by a year or so.  we're in the back yard of our home, going by the fence and the swing set I've seen now in many photos, but still don't remember.  It appears the photo was taken facing roughly to the east.  Seeing that inflatable pool reminds me of just how new mass-manufactured plastic items were back then.  Today precision molded, high-tech plastics are all around us, and our artifacts are increasingly made of them.  That was not so in the '50s – while there were plastic artifacts, they were far from ubiquitous and often still marveled at.  Also, the older alternatives were still easy to find.  For instance, we owned a car (a '48 Dodge) that had a steering wheel made of wood.  That wasn't because of the appearance of wood (this was not a luxury automobile :) – it was because a wooden steering wheel, at the time it was designed, was an inexpensive way to get the characteristics one wants from a steering wheel.  Today you'd only see a wooden steering wheel as an expensive add-on to a luxury car, as plastic is so much cheaper (and, in many ways, superior).  I still remember my dad marveling at the plastic bags he bought for retailing oak leaf mold.  They were primitive bags by today's standards, made from thick non-linear polyethylene.  He paid more for those plastic bags than he would have for the old-fashioned burlap bags (man is that different today!).  He liked the plastic bags because they were airtight, which meant that leaf mold bagged for retail would retain its moisture (and weight!), even after months in storage. 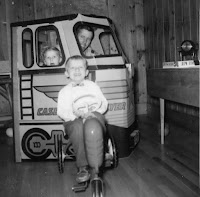 The lab dates this photo as December 1958, and I'm sure it was from Christmas Day.  There's the cardboard locomotive my dad put together in our basement late on Christmas Eve.  He's inside, smiling, apparently having forgotten the trauma of assembling it.  My sister Holly is in there with him, and that's me on the pedal tractor in the foreground.  I can only be grinning because I have no idea how much work the real tractor will bring me in later years! :)  The photo is taken in our living room, facing east.  You can make out our front door behind the locomotive, and the edge of our flying squirrel cage to the left.  On the holly table there's a box labeled “Totem Pole Kit” – I have no memory of that or of any resulting totem pole.  I wonder what my family's totem would have been?  Surely some species of loon! 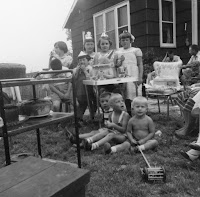 Finally, here's another snap of Scott's off-Christmas birthday party in 1955.  The lab dates this as December 1955, but in my mom's handwriting (fountain pen, again): “Scott’s July “birthday” because he always missed the excitement in Dec.”  That's a reference to the fact that Scott was born on Christmas Day, so the celebration of his birthday – a celebration all about him – was subsumed by the general celebration of Christmas.  This shot is a little wider than the previous ones we've seen of this party.  My brother Scott, birthday lad, is behind the cake on the table with his head turned looking left.  I'm on the ground holding that roll-around toy.  My cousin Jonathan is to the left of me.  I don't recognize any of the other kids.  At left in the photo is a roll-around cart that I remember, with (at least) three more cakes on it.  My mom must have been afraid of running out!  Or perhaps some other moms brought cakes as well.  Sitting on the back porch, his right hand on the back of his head, is my uncle Donald (my dad's brother, and adoptive father of Jonathan).  In later years it was a rare thing indeed for him to visit our home, so it's slightly jarring to see him in this photo.  I don't recognize the other man in the photo.  To the left of the back door you can see a few things hanging on the wall.  The white vertically-oriented object is a thermometer – an old-fashioned glass capillary and colored alcohol type, with a white-painted metal backing and a printed scale.  That was a north-facing wall, and my dad placed it there because it was a cool, sheltered place that was easy to get to.  The main use he had for that thermometer was knowing how cold it got at night.  In the summer, the afternoon sun would strike it, and the reading was crazy high – but that didn't matter for his purposes.  Below it you can see an old-fashioned wooden hand brush that had very stiff bristles – that we used for cleaning the mud from our boots.  The alternative was to suffer the wrath of mom.  :)  I don't remember what the vertical object next to the brush was...
Posted by Unknown at (permalink) 5:09 AM