More memories ... from my mom's collection of photos...

We'll get the really embarrassing photo out of the way first.  Left-to-right, this is my brother Mark, my sister Holly, me, and my brother Scott.  This was taken in the kitchen of our parent's home on the farm in Robbinsville, New Jersey.  My mom wrote “Mark Holly Tom Scott late ‘80s” on the back; the photo is otherwise undated.  The photographer was facing north, looking out the kitchen's bay windows.  A painting by my mom hangs on the wall.  The octagonal table we're sitting at was in our family's cabin in Maine, then moved to New Jersey, then to Virginia, and now it's on the way back to Maine (if it's not there already).  I don't have any memory of this gathering of the family, but it must have been during the period when I was running Epoch Technologies (a company that sold practice management software to optometrists and ophthalmologists) – Mark was our best salesperson, and my mom helped with the sales process.  Mark was making an awesome career change, from auto body repair expert to software salesman – quite a change!  My mom knew we were struggling, and just wanted to help (which she did, very much).  Check out those giant round glasses on Holly!  I sure hope they were plastic lenses, otherwise they must have weighed a couple pounds. :) 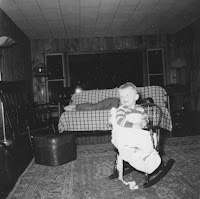 This undated photo is of my brother Scott, with my dad napping on the couch behind him.  My dad loved naps, any time of day or night.  It's taken in our living room, looking west out the picture window, and obviously at night.  Several things to note here.  First, there's a freaking bird cage left of the picture window.  While I can certainly imagine my mom keeping a bird, I have no memory of this at all.  I wonder what kind of bird (or birds) it was?  I do remember that rocker and hassock.  I'm guessing Scott is about two in the photo, which would place this in late '55 or early '56.  The picture window is missing the “picture frame” surround that was installed later.  It's hard to make out, but you can also see that the bookshelves that would later be installed in the nook (to the right of the couch in the photo) have not been installed yet.  There's also a great view of that rug that I simply have no memory of.  I must have played on that rug a lot – funny that I don't remember it at all.

This is my uncle Donald MacLaughlin, my mom's older brother.  The few memories I have of him are of a much younger man.  The time stamp on the photo dates it to February 16, 1997, and I have no reason to doubt it.  On the back, in my mom's handwriting, it says “Don & Marian MacLaughlin”.  I don't recall ever meeting Marian, but I could be wrong about that.  I don't recognize the place where the photo was taken.

This undated photo has on the back, in my mom's handwriting: “Donald MacLaughlin Son of my brother Donald”.  The original is a badly processed print with a color balance far worse than what you see at left after my corrections.  This lad is my cousin, if I've worked out the relationship correctly.  I don't remember ever meeting him, and unfortunately I have no idea where he might be today.
Posted by Unknown at (permalink) 10:59 AM