I would not have recognized this photo of my maternal grandfather; only my mom's “Dad” handwritten on the back identifies it for me. The photo I have is a bad copy of a badly damaged original.  I'm guessing that the original photo dates to the mid-'60s, after he had bad symptoms of emphysema; I only saw him a few times after that.  I don't know where the photo was taken.

Here's one of my dad that I'd never seen before.  It's dated (by the lab) February 1952, a few months after my parents were married.  On the front, in my mom's handwriting (in pencil): “my wonderful husband Tom”.  On the back, also in my mom's handwriting (in fountain pen): “Tom & Lassie”.  I've heard stories about Lassie, our first dog, but I have no memories of her.  Our family home had not even been started at this point.  I'm not certain of the photo's location, but I think it was taken from the entrance to my paternal grandfather's shop, looking westward and capturing the northern side of their home from that perspective.  My dad looks so young in this photo!

This photo is dated (by the lab) July 1964, and on the back, in my mom's handwriting, it says “Tom Tommy Holly”.  Left-to-right the people are me, my dad, and my sister Holly.  I was 11; Holly 9.  It took me a while to figure out where this photo was taken.  The key clue is the driveway visible just above my dad's right elbow.  That's the driveway that led from my paternal grandparent's home east to the front of the farm and US 130.  To the left of me in the photo is the southwest corner of their home, where my grandfather's office was.  I should have recognized the white shutters immediately, but I didn't.  My great-grandmother's wing is just out of the photo's left.  The right side is all out of focus, I'm guessing because someone's thumb was in the lens (easy to do with those old cameras).  In that out-of-focus section there appears to be some sort of structure, but I think that's an illusion, as there was nothing there (especially that high). 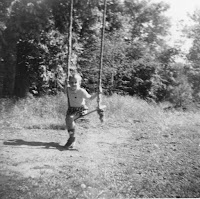 My brother Mark, in a photo dated (by the lab) June 1965, when he'd have been about four.  He's sitting on the marvelous swing we had outside our back yard, off to one side of where we usually parked our cars.  It hung from a large limb of a beech tree, around 15' off the ground.  I remember my dad and our farm helper “Chalky” putting that swing up.  Chalky knew how to tie a rock onto the end of some twine (an old sailor's trick), and the two of them threw that thing up several dozen times before they got it in the right place for the first rope.  The second rope took them even longer! :)  I was pretty young when they put that up, probably in '57 or '58.  By the time Mark got to use it, those ropes were nearly a decade old – and still holding.  It's probably a good thing they were so thick!  This was taken when I was almost 13, and Mark's general appearance here is how most of my memories of him are.  Just a few years after this, I left home to join the U.S. Navy, and I saw him only infrequently until the late '80s.

Finally, here's a photo that's a bit of a mystery to me, as I don't recognize any of the people in it.  Adding to the mystery is the fact that the photo is undated.  On the back, in my mom's handwriting:

My maternal grandmother's maiden name was Mable Johnson, so I'm presuming that Harry Johnson was her father (and my mother's grandfather, and my great-grandfather).  If so, I don't recall ever meeting him – and I'm not sure he was alive when I was born.  Highlands is a town in northern New Jersey.  I have no idea where that photo was taken, nor when.
Posted by Unknown at (permalink) 6:55 AM