Here's a photo of my sister Holly, an undated studio portrait.  The original is 3" x 5", larger than most of the photos in the collection, so the resolution is better.  There's a longer-than-usual note on the back, in my mom's handwriting (fountain pen):


love this!  she wouldn't smile because her teeth weren't in - ha ha!  Dress was given to her by Mrs. R. W. Johnson - silk taffeta, pink

The Mrs. Johnson she's referring to is Evelyn, the third wife Robert Wood Johnson II, the son of the founder of Johnson & Johnson, and the Chairman of the Board for years.  My dad extensively landscaped their “Longleat” estate in Princeton, New Jersey.  The original landscaping was unremarkable, and Mrs. Johnson was looking for something extraordinary.  My dad worked there for years, and I often went with him to help – more effectively in later years than earlier.  My brother Scott also went, I believe.  We knew Mr. Johnson as “General Johnson”; I met him a few times, and he was nice enough.  Mrs. Johnson I met quite a few times, and she was always delightful to be around; she obviously enjoyed having kids around.  She worked closely with my dad on the entire landscaping project, and both she and General Johnson were very generous with my folks.  A gift of Johnson & Johnson stock partly financed their retirement. 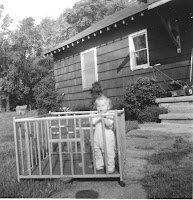 Here's another photo of Holly, undated and with simply “Holly” on the back, in my mom's handwriting.  That's the front of our house, with the front porch (with a lawnmower on it) we so rarely used.  I'm guessing this was taken in the spring or summer of 1956, from her apparent age.  There's a dog house to the left of the photo; I don't remember that.  We would have had Synda then, and I don't remember her having a dog house; I remember her as mostly being indoors.

This photo shows the entire front of our house, which faced east.  The photo is dated (by the lab) October 1954, which would have been shortly after it was finished.  A few things jump out at me.  First, the magnolia is so small – I remember those as 25' tall trees!  Note the old-fashioned bushel basket on the porch – you don't see those any more at all.  There's a curved walkway from the front door that I have no memory of.  The fence that so puzzled me in other photos is not there – it must have been added sometime after this.  The original very dark brown paint is still on the house (judging by the dark shade).  There's a vent visible to the left of the front porch dormer; that's for the bathroom plumbing.  That bathroom wasn't finished until '56 or '57, and we forever called it the “new bathroom”.  The “old bathroom”, which for several years was our only bathroom, was located on the opposite side of the house, all the way right in this photo (the northwest corner).  I don't know if my siblings remember taking showers in the tiny shower stall in there; it was later removed. 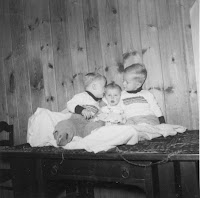 Here's an undated photo with (left-to-right) my brother Scott, my sister Holly, and me.  I remember that table we're perched on, with the ring pulls on the center drawer.  That was taken in our living room.  At first blush I thought Holly was sporting a mohawk, but on careful examination, I think that's a knot in the paneling behind her. :)  It looks like she's holding a pillow or stuffed animal; in either case I don't recognize it.  From our ages, I'm guessing this was taken around late '56 or early '57. 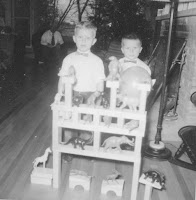 Finally, here's one dated (by the lab) January 1958, surely from our 1957 Christmas.  In the foreground, that's me on the left, my brother Scott on the right.  I have no memory of us ever wearing bow ties at home; I don't know what that's about.  I also have no memory of that collection of plastic animals, or the thing they're being displayed on.  The man in the background is a bit hard to make out, but it's my grandfather Earle Dilatush, my dad's dad.  This was before his awful automobile accident in '60.  The woman's leg at left is almost certainly my grandmother Grace, though it's possibly my great-grandmother Jobes.  This photo was taken in our living room, looking westward out our picture window.  You can see the Christmas tree at right.  Through the window you can see a home, which looks closer than any home I remember in that direction.  The closest home I recall was across our big field to the west, over the railroad tracks, and then a bit further; a family named the Balls lived there.  This house looks close enough to actually be in our big field, and I don't remember any houses there.  The base of a lamp visible to the right of Scott I do remember: heavy metal with a white ceramic ring around the bottom.  I can't account for the expressions Scott and I are wearing. :)
Posted by Unknown at (permalink) 9:13 AM