I spent quite a bit of time with this fine lady, especially for two summers (1960 and 1961, when I was 7 and 8 years old).  When I knew her, she lived in the home of her daughter Grace and her husband Earle (my grandmother and grandfather), on the same farm where we lived.  She had a small wing of the house to herself, with a hallway that opened onto the house's kitchen.  She was quite frail and seldom ventured from her rooms.

The first photo below was taken in her sitting room, the first room in her wing.  I spent many hours in there with her, playing checkers, Chinese checkers, and chess.  Most of all, though, she told stories.  Marvelous stories about things like the first time she ever saw an automobile, or a train, or an airplane.  She had a sense of wonder about her, especially regarding the works and progress of mankind.  She lived through three major wars that the U.S. was involved in (WWI, WWII, and the Korean War), and in her youth the Civil War was a recent event – all of these were vivid memories for her, and she was profoundly thankful for the extended peace of the '50s.  She followed politics closely, too – I remember her railing about Joseph McCarthy.

The second photo was taken in the living room of our home at Christmas.  My grandfather is seated near the picture window, his face obscured by the reflection of the camera's flash.  My sister Holly is on the right, and I think it's my brother Scott with his hands thrown up in the air, just in front of my great-grandmother.  Holly looks like about four in that photo, which means it was probably taken in 1959.  I have no memory of my great-grandmother ever visiting our house.

In this photo you can also see something my father did a lot of work on: the (beautiful) oak floor, and the tongue-and-groove solid knotty pine paneling.  To save money (which was always in very short supply for us), he did the finish sanding himself.  There were two stages to that work: rough sanding with an old-fashioned (gigantic) orbital sander, and fine sanding by hand.  On the knotty pine paneling, the wood was soft – but there was lots of it, and quite a bit of it was resinous, which clogged the sandpaper up.  The oak floor was hard as nails, and the fine sanding was awfully hard work.  I was there for some of that, as an infant, and I have a memory of sitting on the living room floor while my dad was fine sanding nearby.  The flooring was all installed, but of course unfinished yet – just raw oak.  The house was fully framed, but the interior walls were just studs, and the plumber and electrician were still working away as my parents could afford them.  We moved into that house before it was completely finished on the inside, and work continued for several years afterwards... 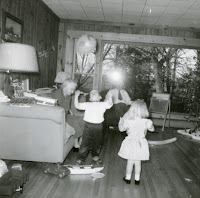 Posted by Unknown at (permalink) 7:33 AM