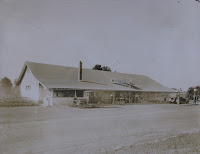 An old memory...  I found the photo at right in my mom's collection.  It shows the vegetable market that was once on the farm I grew up on, along the highway.  This photo shows the market 20 or 30 years before my memories of it.  There are gas pumps in the photo that I don't remember, and I remember a large, square covered area right about where the sign is in the photo.

I've been told that I “helped” selling apples and vegetables at the market, and that my grandfather (Earle Dilatush) was much amused by that.  I have no memory of helping out.  I do remember the (to me) enormous baskets of apples, the displays of vegetables, the lovely aromas, and the excitement of people stopping by to buy produce. My dad told me that the market was torn down in the fall of 1957, when I was just 5.  That makes the market one of my very earliest memories.

I don't believe any of my siblings (all younger than I) remember the market.  For their sake: it was located along US 130, just north of the nursery entrance and sign they surely remember, and south of the Ames' home.  At least until the late 1960s, the foundations of the market building were still poking out of the ground just west of the dirt road alongside US 130.

There are several men in the photo.  I believe the man on the right is my grandfather, younger than I knew him.  The child in the photo may well be my father, which would date this photo to roughly 1932.
Posted by Unknown at (permalink) 2:08 AM