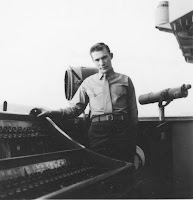 First up is one I never expected to find: a photo of my Uncle “Donnie”, my mom's brother, from when he was in the Marines during the Korean War.  The photo is undated, and my mom wrote on the back “bridge Donnie Marine”.  He's on the wing of the bridge of a U.S. Navy ship.  The telescope and signal lamp are standard Navy issue, both still exactly like the ones I saw in the Navy 20 years later.  At the top right you can see the (also standard) antenna mount; there would have been a whip antenna rising from it.  The odd looking cabinet in front of him is a signal flag cabinet containing the numerous flags used to communicate ship-to-ship – a system that is, amazingly, still in use today.  I only recall seeing my Uncle Donnie a few times, but he and my mom talked fairly frequently.  They were quite close when they were growing up.  Uncle Donnie was a bit of a black sheep in the family – he was (I'm told) a serial philanderer who repeatedly was caught cheating on his first wife.  My dad told me that when in all-male company, Uncle Donnie was fond of telling stories about his escapades in the (perfectly legal) whorehouses of South Korea.  Uncle Donnie made it even worse by marrying another woman (in Florida) while still married to his first wife (in New Jersey).  As a consequence he was a wanted man in New Jersey, and couldn't safely visit for years.  This photo was probably taken around the time I was born, but he doesn't look much different than my memories of him.

This photo sure brought back memories – a boat load of very nice ones.  These are the Shepard kids, from a family of dairy farmers with a beautiful spread near the Quabbin Reservoir in central Massachusetts.  We met the while we were both camping somewhere in the Western U.S. (my memory says Crater Lake, but I'm not sure that's right).  We all hit it off right away, and we saw each other quite a few times.  They visited our farm at least once, and we stayed with them a couple of times.  Wonderful people, they were.  I've often wondered what happened to them all.  Massachusetts has to be a challenging place to have a dairy farm...

Here's a nice color photo of my brother Scott from March 1960 (according to my mom's note on the back.  He was kinda cute back then, wasn't he?  It's been all downhill since then. :)  He would have been six years old then.  I don't know the context for the photo, but it looks like the photos that our school used to have taken.  It's definitely in a studio; my parents would never have been able to get the lighting right.

Finally, here are a couple more photos of my youngest brother Mark.  Neither of them is dated, nor are there any notes on the backs.  The one on the left is a studio shot, perhaps a school photo like Scott's above.  He looks older in that photo than my memories of him.  I left home (to join the U.S. Navy) when he was nine, so I suspect he's at least ten in that photo.  I don't know what the hell is going on in the photo on the right.  Purple pants, a dress, a hat from a bad science fiction movie, and colored feathers?  What is that?  And a saxophone?  If he played any musical instruments, I don't remember it.  I just did an image search on Google Images, and it looks like that is a mummer costume.  This is an element of human perversion that until now I have been blissfully unaware of.  Thanks a lot, Mark.