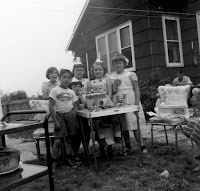 First up is a photo that's a bit mysterious to me.  This one is dated by the lab as December 1955.  The house looks like the north end of our home on the Robbinsville farm – but I don't remember there ever being a fence where there's one in the photo, and I don't remember a clothesline stretching from the back porch.  It's obviously a birthday party, and that might be me behind the cake.  If it was my birthday, then this was taken in September 1955, when I was three.  I do remember the folding table and the roll-around cart, but not those chairs.  Were those really ours?  Funny how memories and the mind work.  The other six kids in the photo don't look familiar to me at all.  The man visible in the background looks vaguely like a young version of how I remember my Uncle Earle (my dad's oldest brother).  Any of my relatives care to chime in on this one? 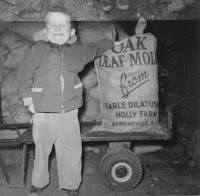 This one is unmistakably my brother Scott.  In my mom's handwriting, on the back: “love this expression”.  The lab dates this as February 1959, when he would have been 5 years old.  He's in the same pose as a photo of me that I posted yesterday.  I have no idea why he's so happy there! :) 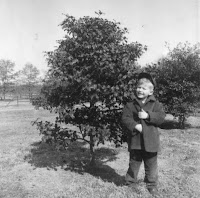 I believe this is me, posed in front of (I think) an English holly.  The lab dated this photo as February 1959, but from the deciduous trees in the background I'd guess it was more likely in the fall of 1958; I'd have been six years old.  There's an orchard in the background, so I think this must have been one of the older holly growing fields to the west of my grandfather's house (where today there's a group of office buildings).  These hollies were all sold when I was fairly young, and for most of my childhood those fields were either in soybeans or were pasture. 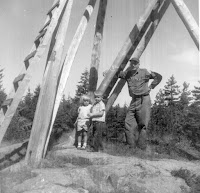 Here's another one that's a bit of a mystery.  I'm pretty sure the two kids are my sister Holly and my brother Scott.  The photo is dated by the lab as December 1959, when they would have been 4 and (almost) 6, respectively.  The man to the right is in a forestry service uniform; I have no idea who he is.  I don't recall us knowing any forest rangers, but that's certainly the kind of person my dad would have known.  The structure looks like the base of a fire tower made from logs; these were the norm in the New Jersey pine barrens.  The trees visible could be the scrubby pines from the pine barrens, but they look more like spruce to me.  On the other hand, the rock on the ground looks like granite, which suggests somewhere in the Appalachians, quite possibly Maine (though not in the winter!).  I wonder if any of my siblings can place this better?

Speaking of siblings ... here's the first one I've run across of my youngest brother Mark.  The photo is undated, but clearly from when he was very young, so probably 1961.  In my mom's handwriting on the back is simply “Mark”.  I was 8 years old when he was born, and I have some clear memories of the event.  I remember mom getting bigger and bigger, and complaining of discomfort – she was much less fun then. :)  Then she went to the hospital, which I didn't really understand, and it frightened me.  Dad looked very harried and worried, too, and we had baby sitters frequently.  I don't remember how long she was in the hospital, but it seemed like forever to me.  Then one day a white bassinet appeared in our dining room, and shortly thereafter mom and Mark came home.  After that, chaos!  And some resentment and puzzlement on the part of us older kids, as Mark was (obviously) the focus of mom's attention for a while.

This is another photo of me, dated by the lab as April 1954, when I was about 18 months old.  In my mom's handwriting on the back is “Tommy”.  I don't remember that shower floor, darn it, so I'm wondering if this was in my uncle's house (in the rented apartment) or in the “old bathroom” of the house my parents built.

Finally, here are two photos of my grandmother Mable, my mom's mother. Both photos are undated, and in my mom's handwriting says simply “Mom”.  I can't place either of the photos.  My memories of her are very fuzzy; she didn't have nearly the impact on me that any of my other grandparents did.  She never really seemed to engage with me (I'm not sure if that's a shared experience with my siblings).  She certainly was never unpleasant or standoffish, just not a particularly intense presence.

Posted by Unknown at (permalink) 7:38 AM