This one brings back a mix of happy, funny, and sad memories.  The young man in the photo is Joe Trembula, my best friend in my teens.  He was the son of Lithuanian immigrants, Josef and Freda Trembula.  His dad eventually bought an acre or so of our family farm, where he maintained a beautiful garden.  After I joined the U.S. Navy in 1971, Joe and I lost touch.  Through my mom, I learned of a series of tragedies in his life, culminating in his suicide about 15 or 20 years ago.  As a kid, Joe was cheerful, ambitious, and possessed of a spectacular drive.  He was also quite consumed by thoughts and ponders of right, wrong, honor, and dishonor.  Some of this I know came from his dad, who was quite an old-fashioned man.  One example that illustrates Joe's character is his decision to build a canoe, at age 15.  He got his dad's permission to use their basement for this purpose, and then went to work.  He did it “right” by his measure.  That canoe was framed in solid oak, planked with 1/2", 7 ply clear (no knots) birch marine plywood.  Those materials alone would cost a fortune today!  The canoe was flat-bottomed, but the sides curved.  To get the oak frame to curve, Joe built a steam cabinet (from scratch!) and bent the four oak longitudinal beams.  Where the beams joined, he hand-chiseled mortise-and-tenon joints.  In oak.  When he had the entire frame perfectly fitted (all joined without screws or glue), he drilled hundreds of pilot holes for screws, took it all apart, glued one joint at a time, clamped it, then screwed in brass screws.  He drilled all those holes by hand, with an old-fashioned brace-and-bit.  Then he screwed in the screws with a hand screwdriver, so as to minimize the chance of stripping a screw.  If he damaged a screw's head, out it came to be replaced with a new one.  When all the wood work was done, he fiber-glassed the outside of the canoe with three layers of very fine fiberglass cloth.  That damned canoe weighed over 200 pounds when he finally finished it.  It was practically indestructible – we teasingly called it his “Polynesian war canoe”.  He and I took several multi-day trips in that canoe, most memorably a trip down a river in the New Jersey pine barrens all the way to a harbor along the New Jersey coast.  I often think about Joe, wondering why his life turned out the way it did.  As a kid, I always thought he would become a famous, accomplished man – his energy and drive were overwhelming... 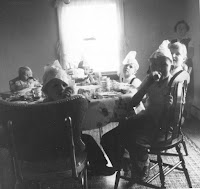 Here's another photo with some mysteries in it.  It's obviously some kid's birthday party.  The room is the dining room of our house in Robbinsville.  The woman standing in the rear was my Aunt Marion, the wife of Donald, my father's older brother.  She nearly always looked sad or somber with her arms folded, just as in this photo.  If she's there, then my cousin Jonathan (their adopted son) is almost certainly there too – but I can't pick him out.  The lab dated the photo as February 1957, when my sister Holly would have been about two; I think she's the left-most kid.  I think that's me behind the cake; I'd have been four and a half years old.  On the back my mom wrote “I forget whos birthday”.  The date is wrong for it to have been mine, Scott's, or Holly's – so it's a mystery to me, including why it would have been in our home.  One possibility: my parents didn't have the film developed for a long time after it was taken.  Another possibility: my brother Scott was born on Christmas Day, so sometimes my parents would celebrate his birthday on another day, so that he wasn't “cheated” out of a celebration that was all about him. 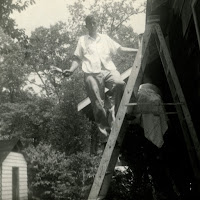 This is my dad, painting the west side of our house.  The lab dates the photo as November 1958, though it's clearly not taken in the winter.  It's probably from the summer of 1958, which is the most likely time for him to tackling a big project like painting the house.  My mom wrote “Tom painting. Egads!!!” – and it is an unlikely activity for him. :)  The outbuilding visible left of him is his old chicken shack.  He built that before heading off to the war, when he dreamed of becoming a chicken farmer.  Really!  On a couple of the trips I took with him, I had several long discussions about it.  Before his wartime experiences, he relished the idea of making a living by raising chickens – mainly because it was relatively profitable but wasn't very hard work.  He taught himself how to do it, built the chicken shack, and for a couple of years raised chickens for eggs and meat.  Then he went off to war, and when he came back discovered that neither of his brothers were interested in taking over his father's holly tree business, so it was his for the asking – and he forever gave up his chicken farming ambitions.  In this photo, he's wearing his “uniform” – the clothing he normally wore to work at home.  This was a light cotton short-sleeved shirt and sturdy cotton twill pants.  Normally he'd be holding a shovel, or pruning gear, not a paint brush.  :)  That haircut was his norm, too.  Behind my dad, you can see the tall beech tree that shaded our driveway, and held our swing. 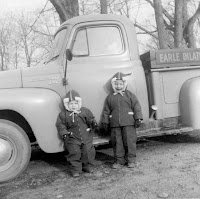 Doesn't this look like something out of a history book?  It's hard even for me to believe that this was within my lifetime!  The photo is dated by the lab as February 1957, and my mom wrote “Tom and Scott” on the back.  That's my brother Scott on the left, three years old, and me on the right, four and a half years old.  I remember those outfits – jackets and insulated pants.  Seeing that truck brought back all sorts of memories.  It's a 1956 International Harvester S100 1/2 ton pickup, my grandfather's pride and joy.  After he had his awful car accident, this basically became my dad's pickup, replaced in the late 1950s by a Volkswagen pickup.  This photo was taken while the truck was fairly new – the scratches and dents that I remember are missing.   The sign that starts with “Earle Dilatush” was replaced later with one that just said “Dilatush” and included the cardinal-and-holly logo the nursery later used.

Finally, here are two more photos of me.  The first one is dated by the lab as March 1955; I'd have been two and a half years old.  That's the kitchen of the home my parents built, looking south toward the living room.  The old Kenmore electric stove is on the left, and the serving window between the kitchen and the living room is open (you can just make out the living room's ceiling tiles through it).  The beautiful knotty pine kitchen cabinetry (loved the hardware!) is on display.  It looks like a couple of roasting pans on side, up on the counter top.  I have a top knot!  The second photo the lab dates as February 1957, when I was four and a half years old.  This must have been developed much later than when it was taken, as I can't imagine we'd have been out in a rowboat in February, even in New Jersey!  I don't recognize the boat at all.  At a guess, this was taken while crabbing (something I remember well) in a northern New Jersey bay, in a rented boat.  The boats and dock all look like the right type.  Note the old-fashioned kapok life preservers at right, and the carved wooden cleat on the deck.  Neither of them would be seen these days!  Near the life preserver, it looks like the top of a Fanta bottle peeking out – and that means that most likely my mom was in the boat, as she loved that stuff.  Next to me is the top of an anchor.  Behind me (left in the photo) is the handle of an oar.  In front of me (right in the photo) is a long wooden handle – most likely for a crabbing net.  I can't tell what I'm gripping – a bag of some sort.  Possibly it's bait, or maybe our lunch. :)  If I'm guessing correctly, then we'd have had a fine meal that evening! 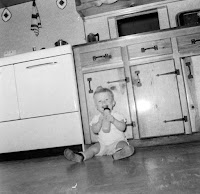 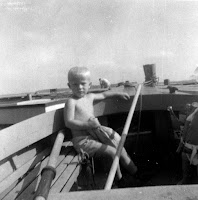