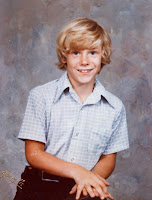 First up is a young man named Demmy (I've forgotten his last name).  The lab dated it December 1977, which is when I got out of the U.S. Navy after having left home six years before.  My dad started volunteering for Big Brothers in the late '60s, and had been paired with several boys with no dad.  One of those, while I was still living at home, was a kid from the Trenton ghetto, a young black boy.  I've forgotten his name, but I'll never forget how terrified he was to be on a farm.  That poor kid only felt safe in the known quantity of the ghetto.  That pairing didn't last long.  Sometime after I left home to join the Navy, my dad was paired with Demmy – and that lasted quite a few years.  From conversations with my dad, I know that he (my dad) found this relationship quite fulfilling, but also frustrating at the same time.  I met Demmy a couple of times when I was home on leave.  I have no idea what's become of him.

This cutie is my cousin Sandy Over, the daughter of my mom's sister Betty and her husband Bill.  The photo is undated, but I'm guessing it's from the early-to-mid 60s, as I knew her when she was older than in this photo.  I believe she's a year or two older than I am.  Her family and ours visited each other a few times a year; they lived not so far away in northern New Jersey.  Aunt Betty had a slew of kids – 10 or 12 or so.  Of that crowd, two stood out for me: Sandy and her sister Patty, most likely because they were reasonably close to my age.

Here's my brother Mark again, in an undated studio portrait (school photo, perhaps).  What a devilish expression!  I'm guessing he's 7 or 8 years old in this photo, which would place it in 1968 or 1969, not long before I left home.  That makes sense, because his appearance here (not including the fancy duds!) jibes with my memories of him when I left.

My cousin Buster is at left.  He's the son of my Aunt Lillian, my mom's sister.  I have no memories of either Buster or Aunt Lillian, and I'm not sure why.  We must not have seen them often, because I can't dredge up any recollection of them at all. 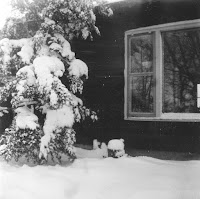 Finally, here's a photo of our home on the farm in Robbinsville.  This is looking at the west side of the house during a snowstorm.  The photo is undated, but from the paucity of landscaping and the dark color, it has to be before 1958, when my dad painted the house a lighter shade.  The picture window (left 1/3 or so of it is visible) was the centerpiece of our living room.  It overlooked a planting and the forested creek valley, and my mom's bird feeders.  Visible on the top of the smaller window is the hanger hardware for the “storm window”.  This was a second window, a single pane of glass, that together with the primary window provided a bit of insulation in the winter.  Storm windows were a positive thing, but nowhere near as good as today's double- and triple-pane windows.
Posted by Unknown at (permalink) 4:24 PM