The photo at right has notes on the back in unfamiliar hand printing.  It's most definitely not my mom or dad; I know their printing very well.  It's written with a fountain pen, something that I've never seen my parents use.  The notes say: “June, 1953  Stan and Grove at quitting time on the Dilatush’s home.”  Presumably Stan and Grove are the masons who built the foundation.  We're looking at the north wall of the foundation, with the kitchen bay poking out.  One thing of interest to me: the west wall right under the guy sitting on the top is solid.  I remember that wall having a rough doorway; really, just a hole.  It led into the foundation for the “old bathroom” which appears to be missing in this photo.  I'm guessing that the bathroom was added on at some point during the construction, and wasn't part of the original house plans.  It looked like an add-on, too – a wart on the otherwise straight west side of the house. 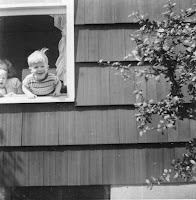 This photo is undated and has no notes on it.  The boy leaning out of the window has to be my brother Scott, and the baby alongside is likely my sister Holly.  That dates this photo to roughly 1956, when Scott would have been between two and three years old.  I think that's the east-facing window of our dining room, and the photo taken in the morning with the sun to the southeast.  I can make out a picture hanging on the wall opposite, but the light colored rectangle behind Scott is a mystery to me.  The woman whose face is mostly hidden doesn't look like my mom, but I don't know who else it could be. 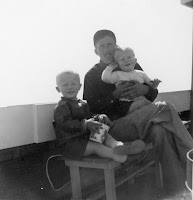 This photo is dated (by the lab) June 1955, and it looks like we're on a boat.  I posted one yesterday that was also June 1955 on a boat, but all three of us were in different outfits in that photo.  I'm guessing we had another day on the boat.  That's me on the left, holding a bucket (bait?), and my dad holding my brother Scott.  Dad must have been cold – he's wearing a long-sleeved shirt, probably cotton twill though possibly even flannel. 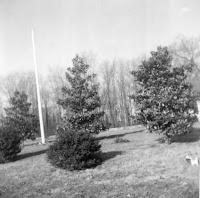 Here's another photo of our Magnolia grandifloras, and a better view of the flagpole, dated (by the lab) March 1959.  Certainly it was taken in the winter; the trees in the woods have dropped all their leaves.  In my mom's handwriting, a note on the back says “tree to the right of the flagpole is our big magnolia”.  The south end of our house is just visible on the right; this photo was taken facing south-southwest, apparently (from the shadows) quite early in the morning.

That's Jessie Johnston at right, in a photo dated by the lab as August 1972.  In my mom's handwriting on the back there's a longer-than-usual note:

I don't remember either Jessie or Sally, but I certainly remember Papa Johnston – a “character” of epic proportions, and the main figure in dozens of hysterically funny stories.  It looks like that dental clinic is still around, and that Jessie's married name was Jessie Albert.

Finally, three photos of me.  All three are undated studio portraits.  On the first one in my mother's handwriting it says:


My beautiful oldest son – I love this photo.  He looked so much like the Ivory Baby.

I think my mom may have been just a little bit biased. :)  There's nothing on the other two.  So far I've seen about 10 studio portraits of me, and I don't remember ever sitting for even one!