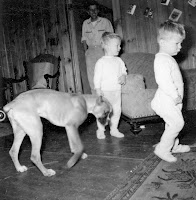 This one has on the back “Christmas morning” in my mom's handwriting, but no date on it anywhere. We're in the living room, my brother Scott is on the left, I'm on the right, and my dad is in the background standing in the door to our bedroom hallway.  Judging by our age, I'd guess this is 1956.  I love the way Cynda is following us. :)  The picture window is out of picture to the right, where we're heading – and that's where our Christmas tree would have been up.  That stuffed armchair I remember very well.  One memory welling up: my dad sitting in that armchair, with me on his shoulders, brushing his hair while he moaned with pleasure.  I don't remember the rugs at all – but now I've seen them in several photos, so they couldn't be some temporary thing. 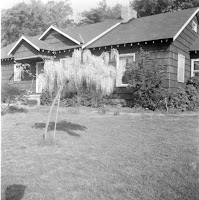 This is the “front” of our home on the Robbinsville farm, the one my parents built.  The photo is undated, but on the back in my mom's handwriting is “1st and only year this blasted thing ever bloomed”.  I don't remember that tree, so I don't know what it was.  Judging from the landscaping and the sidewalk, I'm guessing this photo was taken in 1956 or 1957.  We're looking at the northeast corner of our house, and the dining room was right in that corner.  The front door, visible to the left of the photo, opened directly into our living room.  The bay just visible on the right of the photo is the north end of our kitchen.  I'd completely forgotten that the front porch had a roof over it.  We rarely used that entrance, so I guess its details never soaked into my brain. :)  The dormer visible above the porch roof I do remember – but from the inside.  We had a large attic that my parents used for storage, and that dormer held the boxes of stuff that were most interesting to me: my dad's papers and photos from the war and before.  For some reason I was often the person detailed to go up into the attic to find something, and I had the chance, a few times, to look through those boxes.  The entrance to the attic was a “hatch” over the end of our bedroom hallway.  I remember hundreds of photos of scenery, most likely from North Africa and Italy, where he was stationed in the war.  There were a couple of locked boxes that I never got into, darn it.  I remember some foreign money, some sea shells, and bags of seeds.  All of that stuff is long gone, unfortunately; I'd sure like to have it today.

This is my dad and I, in June 1954 (lab date) when I was almost two years old.  On the back, in my mom's handwriting: “Tommy and Tom”.  That curved sidewalk has been in some other photos; I think it was at the southeast corner of my grandparent's home on the farm, but I'm not at all certain of that.  I'd give a lot to hold my dad's hands again...

Here's one of several photos I'd never seen before: our house on the Robbinsville farm while it was being built.  On the back, in my mom's handwriting: “building our house 1953”.  From the foliage in the woods behind, that's in the summertime.  We're looking at the northeast corner of the house, and the worker is in the northwest corner of what would be our dining room.  The big steel tank in the foreground must have been the oil tank (for our heater), which was buried on the north side of the house.  It's interesting to see the old-fashioned construction techniques on display here; anyone familiar with modern home construction will immediately pick out all sorts of differences.  One thing that jumps out at me, because I'd forgotten it: the tall opening (with a lower top) in the basement wall, the second opening from the left in the photo.  That was a doorway that opened into a small storage area underneath our front porch.  It was like a closet in the basement.  There was a second such basement “closet” on the northwest corner of the basement, under what we called the “old bathroom”. 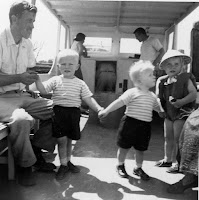 Here's one I'd love to know the story behind.  It's dated (by the lab) June 1955, and on the back in my mom's handwriting it says “Cape Cod fishing boat”.  That's my dad on the left, holding my hand; I'm holding my brother Scott's hand.  Scott is holding a little girl's hand, but it can't be my sister Holly because she'd have been an infant at that point.  I have no idea who that little girl was.  Likewise, I don't recognize any of the people in the background, or the boat itself.  And I have no memory of ever being on a Cape Cod fishing boat.  On the other hand, my dad knew quite a few fishermen – a result of his love of home-cooked seafood.  He found gems of seafood eateries all up and down the east coast.  It wouldn't surprise me at all to discover that he had a fisherman friend on Cape Cod.

Finally here are a couple of kid photos: my sister Holly on the left, and my brother Scott on the right.  These are studio shots, and undated.  I'd guess 1961 or 1962 for Holly's, and a couple years earlier for Scott's.

Posted by Unknown at (permalink) 4:37 AM