This photo is dated (by the lab) December 1979, and my mom wrote “Ray” on the back.  I met this young man very briefly, once, when I was home on leave from the U.S. Navy.  He was a friend of my dad's who helped out on the nursery a great deal for a number of years.  About eight years ago I spoke at some length by phone with Ray's dad, who is a police officer in New Jersey.  Ray was troubled by some of his interactions with my dad, and his dad was searching for understanding.  I have a great deal of sympathy for both Ray and his dad; I've long hoped our conversation was some help, even if in some small way. 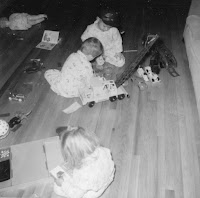 Christmas 1957 at our house!  The lab dated this January 1958, but it could only have been taken on Christmas Day with that mess!  Top-to-bottom there's me, my brother Scott, and my sister Holly.  My memories of Christmas time at home are apparently all out of whack – I'm very surprised by all the toys visible here, not a single one of which I have any memory of!  We're all still in our pajamas, so this is probably early on Christmas morning – probably right after we opened all our gifts.  I don't know why I'm wearing a cap – perhaps that was a gift, too. 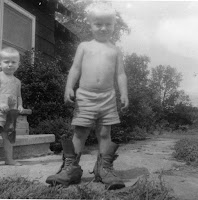 Here's me, feet stuck into my dad's boots, with my brother Scott in the background holding a sock which must be my dad's, too – it's way too big for him! :)  My mom wrote on the back: “He does fill those shoes.”  I'm sure she meant that in a cutesy way, but the first thought that came to my mind as I read that was “You’re wrong, mom.  I don’t even come close to filling those boots – not then, not today.”  The two of us are standing just below the rarely-used front porch of our house.  I can tell from the landscaping that it's at most a few years since the house was built, and the lab's date confirms that: August 1956, just before my fourth birthday.

Here are three more photos of me.  The first one has a note from my mom on the back:

I am, unfortunately, considerably heavier than that now. :)  The second photo is dated (by the lab) as June 1954, when I was a few months shy of two years old.  My mom wrote “Tommy” on the back.  It looks like I'm sliding down a grass-covered hillside with mature trees at the top – I can't think of any place like that on our farm, so we must have been visiting somewhere else.  The last photo my mom wrote “Tommy 4½ months”, which puts the photo date in January 1953.  I have no recollection of that giant stuffed bear.  At that point we were living in the rented apartment in my Uncle Donald's house, and I don't remember the furniture there so I can't tell if that was taken in our apartment.

Posted by Unknown at (permalink) 3:47 PM