Fire in Paradise!  But it's fire we actually wanted :)  This year the Hyrum Irrigation Canal folks are sending two separate cleanup crews down the length of the canal.  The first crew started today; they're burning weeds and roses along the sides of the canal.  They're also burning some ancient brush piles that were left by canal cleanup crews in prior years.  The second crew will be along in a couple weeks; they'll be clearing brush and downed trees that are in the canal.  We have a little over a quarter mile of that canal that runs through the eastern edge of our property.  We did a lot of cleanup ourselves last year, plus had a horde of local Mormons come by on a service project that got even more.  Between the canal company's work and what we plan to do ourselves this year, we should have a much better-looking property!

The crew today used a large propane torch powered from a 250 propane tank trailer they hauled behind a pickup.  Here's what it looked like while they were working: 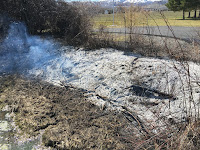 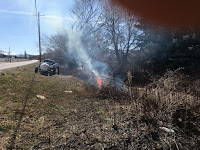 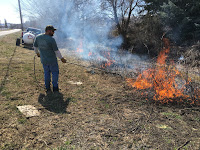 Posted by Unknown at (permalink) 1:21 PM