The roundabout way to Mantua... 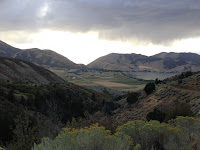 The roundabout way to Mantua...  We had a little four-wheeling adventure late yesterday afternoon, and it led to the best viewing of peregrine falcons we've ever had.

We started out heading south from home, through Paradise and Avon and on to the (dirt) road leading over the mountains to Liberty.  We didn't go more than two or three miles on that road, though, as we turned right (west) on a intersection that our map said leads all the way to Mantua.  After passing through a gate we climbed for several miles, finally reaching a pass that gave us the view above.  The lake is the Mantua Reservoir, and through the gap to its left you can make out (in the glare) the northern reaches of Brigham City. 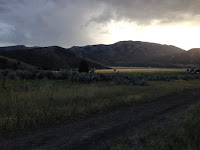 There were several routes available to take at that pass, and none of them are marked.  The majority of the traffic takes a branch that goes to a private home and is gated off.  The road that continues through bears to the right of that branch, and is apparently little traveled – it was kind of rough :)  For the next couple of miles or so, it headed steeply down through a series of rocky switchbacks.  If it's wet or muddy, that section could be challenging.  Yesterday was neither, and we had no trouble.  Once down on the bottom, we crossed a wide and fairly flat valley, quite pretty, and chock full of peregrine falcons.  They were by far the most common bird there.  At some points we had 10 or so of them doing their tricky acrobatic flying all around us.  We saw lots of them perched on fence posts, including one with a half-eaten mouse that gripped the fence post with its knees while hanging onto the mouse with its claws.  That was exciting for us, to see all those beautiful falcons!

After we crossed that “Falcon Valley”, we headed down a draw an into Mantua's valley.  The photo above left shows some pretty lighting we saw on the way down.  Mantua has an unlikely pronunciation: MAN-uh-way.  How they get that pronunciation from that spelling is beyond my ken, but the locals all insist that's correct.

It was a very pleasant evening drive for us: some real four-wheeling, a bazillion falcons, and even a few deer thrown in for good measure.  We'll be doing that drive again, for sure!
Posted by Unknown at (permalink) 6:55 AM