Day 2...  We got an early start this morning, leaving Cheyenne at just about daybreak.  Our route was basically I-80 all the way, but we sure traveled through some beautiful country.  Much of it was through rolling hills, or along the Platte River.  All of it was green, green, green – except when there were flowers.  Nebraska has way more trees than I remember, and far more water.  We really enjoyed that drive!

About two-thirds of the way into our trip to Lincoln we stopped for a while at the Crane Trust preserve.  There's a beautiful trail there that we spent a half hour on, but to our surprise there was live music, food, and more – it seems we stumbled into their 40th anniversary bash unawares.  That's not our kind of thing, so we left – but it looks like a great place to come back to.

The highlight of the day for us came at an unlikely location: the Gothenburg, Nebraska Tesla Supercharger.  We took a little walk to the sod house museum there, where I spotted a very weird windmill and spent a few minutes trying to figure out how it could work.  A little old lady popped out of the museum, the guide there – and we spent the next 90 delightful minutes just talking up a storm with her.  Her name is Suse Pederson, 85 years old, and she's as full of great stories as anyone we've ever met.  She and her husband used to own the local airport and the associated flight training school.  Both were pilots and instructors.  We learned a tremendous amount about the town and the area in that short time!  We parted reluctantly, and only after several tries and several rounds of hugs.  We've been smiling about that encounter all day long. :)

Some memorable events of the day: 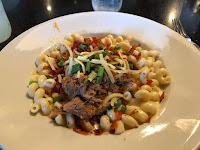 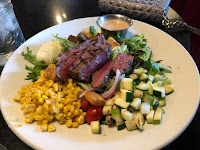 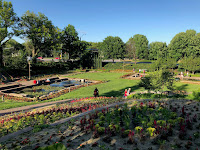 All-in-all it was a very nice day...
Posted by SlighlyLoony at (permalink) 7:33 PM