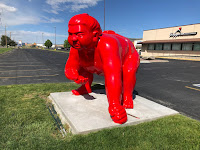 Day 1...  We made it to our planned destination (Cheyenne, Wyoming) safely, and with some time to spare.  The trip over here was more interesting than we expected it to be.  The fellow at right was near the second supercharger we stopped at, in Rock Springs, Wyoming.  It's actually associated with the restaurant in the background.  Looks weird from the front, but a little shocking from the back. :) 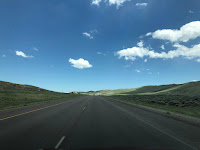 Along the road on today's trip we spotted quite a few Sandhill cranes, and about two bazillion antelope (including one baby!).  There were lovely flowers as well, most especially Camas lillies in the low wet spots.  We saw several places where there were patches of them alongside snow fences – Debbie came up with a plausible theory for that: snow piled up in front of the snow fence, melting to make a wet spot conducive to Camas lillies.  Sounds likely to me.  There was beautiful, well-watered sage over a stretch of 150 miles or so.  I love that color!  At one point we got sprinkled on, but the nearest cloud was at about a 45 degree angle to us – all we can think is that the wind blew the rain onto us.  We also saw patches of gorgeous yellow flowers that we're pretty sure were yellow lupine (they were too far away to be positive about).  The photo at left was taken about 75 miles from Cheyenne as we passed through some particularly nice terrain.

One interesting thing we saw was hundreds and hundreds of automated oil wells.  These are much less intrusive on the landscape than the old rocker-arm oil wells.  Most of them have no visible infrastructure outside a small shed, other than a fuel tank (propane, I think) and a satellite antenna.  I know these are remotely monitored and controlled, which means the companies save a great deal of money in labor (traded off by the increased capital cost).  I think they're a huge improvement on the old style wells. 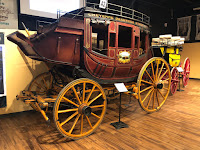 Once we made it to Cheyenne, we stopped to eat at a place called Ribs and Chops – had a great meal of fish tacos for Debbie and fish-and-chips for me.  Very nice.  Then we went to the Cheyenne Frontier Days museum, associated with the famous annual Cheyenne Frontier Days rodeo.  The museum was fascinating, especially for the collection of horse buggies there (one example at right).  We spent almost two hours in there, leaving only because it was closing.  Cheyenne must have a dozen or more museums, most of which look interesting to both Debbie and I.  I suspect we'll be returning here someday to explore them.  There's also a botanical garden that looks quite promising.  And our bed-and-breakfast is super nice. 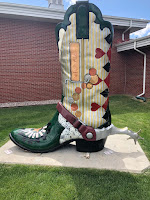 And then there are the shops.  Debbie spotted one called “The Wrangler” and spent some time in there while I charged the car.  She sent me several texts, the gist of which was “I love this place!”.  When I picked her up, her eyes were glistening and three giant shopping bags were in her hands.  I shudder to think what she did to our credit card account. :)  She said she got a pair of boots like the giant one at left.  Those fancy boot statues are scattered all over Cheyenne.  Apparently they're some kind of city symbol...
Posted by Unknown at (permalink) 7:11 PM