About a month ago...

About a month ago ... I bought a trailer to tow big, heavy things behind our Tesla Model X.  I bought some accessories for it, and yesterday I finally got around to installing them.  We're leaving on Thursday for a three-day trip to Lander, Wyoming, where we're going to pick up a bronze sculpture that we commissioned last year.  We're going to the foundry where they're pouring and finishing it – should be great fun!

The photos below show the additions I made to the trailer (as always, click on the little pictures to embiggen them).  The first photo shows the spare tire mounted, with a cover on it.  The second photo shows the mount I had to install.  The mount was quite easy to install – the hard parts were getting that cover on it, and getting the right stainless steel hardware to mount it (stainless steel because I don't want rust on the aluminum trailer).  The third and fourth photos show the box I mounted on the trailer's tongue.  There are six bolts and fender washers holding it to three frame members.  The tricky part for this thing was getting all those holes precisely drilled, so that all six bolts could be simultaneously inserted.  The six holes in the frame members needed to be in the centers of those members, and then I had to drill six perfectly matching holes in the bottom of the tongue box.  Another tricky bit was finding the right stainless steel hardware – I did a lot of bin-searching at Ridley's.  Finally, I installed a trailer lock – the red gadget showing on the tip of the tongue in the third photo.  This is an ingenious device that inserts into the trailer ball socket and locks around it, preventing anyone from attaching the trailer to their vehicle and towing it away.  Simple, but effective.  I'm completely unworried about trailer theft around home (we have nearly zero crime in Paradise), but when we travel to other places things may be a bit different. 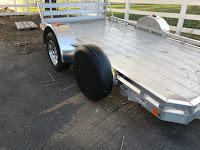 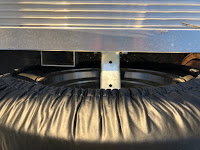 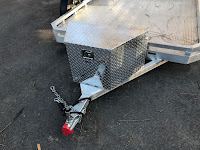 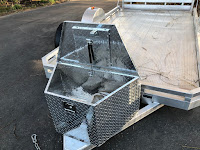 By the time I finished with the trailer stuff, I was wiped out.  I went back into the house, and discovered that Debbie was feeling puny, too.  We both took our temperatures and found that we had matching 102°F fevers.  No wonder we felt awful!

It's a glorious morning this morning.  As I was taking the trailer photos above, our three young field spaniels were cavorting in the fenced yard, begging me to join them.  They love this nice weather!  The first photo below shows how nicely things are starting to green up, and the willow is starting to come into leaf. 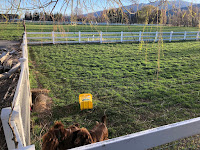 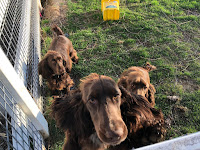 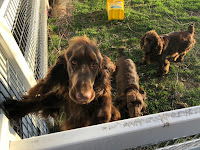 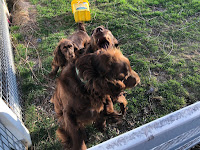 Posted by Unknown at (permalink) 6:53 AM