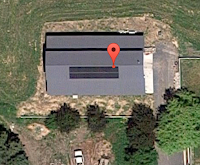 Paradise ponders: NTP server update...  I wrote yesterday that I had installed the new antenna on my barn roof, and that a quick check showed it to be working correctly.  Well, now it's had most of 24 hours to get settled down (NTP and GPS both take a while to do that), and I have some more concrete results.  First, the photo at right shows my barn with a superimposed indicator showing where my NTP server's GPS believes it is.  The position shown is roughly eight inches (33 cm) from where it actually is.  This is gobsmackingly good!  It's also an amazing demonstration of several different technologies.  First, there's the satellite photo of my barn superimposed on a map of the world, via Google maps.  What an astonishing capability – especially given that it's free – this is.  Then there's my little under-$100 Raspberry Pi with a high-performance GPS (including an active antenna) system.  State-of-the-art geolocation when I was a kid was map-and-compass.  Then there's the amazing correspondence of these two completely independent chains of technology.  That 8" error is the sum of the error in Google maps and in my GPS.  And it's just 8"!  Like I said, it's gobsmackingly good...

Then here's a report from my GPS (extracted with the work-in-progress program I'm writing), produced this morning:


There are several interesting pieces of information in there beyond the location.  First, there's the fact that 21 satellites were used to calculate the 4D fix (the four Ds are: latitude, longitude, altitude, and time).  These satellites were part of three independent satellite systems: the US's Global Positioning System, The EU's Galileo, and Russia's GLONASS.  The accuracy of the 4D fix improves as the number of satellites used goes up, and with 21 satellites that accuracy is darned good.  Of most interest to me is the time accuracy, as that's what's synchronizing my NTP server.  The GPS is reporting that its time signal is accurate to within 12 nanoseconds (that's 0.000000012 seconds).  That will do just fine!

If you're wondering about that reported motion, first of all 0.007 mph is a very slow motion indeed: about one tenth of an inch (2 mm) per second.  Most of us would not distinguish between that speed and motionless. :)  But why isn't it zero?  That reported speed is the result of a small amount of “noise” in the GPS fixes.  From one fix to the next there is always a slight variation in the calculated location, even though the actual location isn't moving.  That “fix noise” looks like some very slight motion to the GPS, as it is exactly what would happen if you actually were moving ever-so-slightly and there was no fix noise...
Posted by Unknown at (permalink) 7:13 AM