Paradise ponders: dogs in the snow edition...  Well, we had a most unexpected event last night: snow!  Roughly 2" of the white stuff, heavy, wet, gloppy snow.  The forecast called for a moderate amount of rain, but apparently it was a bit colder than the weatherman expected. :)

We let the dogs outside to play in it, and they had a ball.  Short video at right, a few photos below.  This may well be Ipo's first sight of snow: we believe she spent last winter in Florida, with her then-owner.  If this was her first snow, she certainly seemed unfazed by it.  Miki (first photo) was more like “Oh, crap, we’ve got this again?” .. 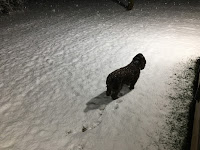 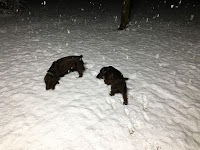 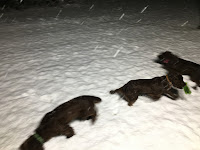 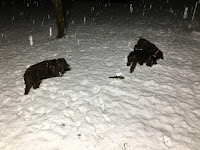 Posted by Unknown at (permalink) 5:47 AM