Paradise ponders: cat bath, stirrup people, Scott flock, rodeo, and puppies edition...  I worked most of yesterday on my irrigation supervisor program.  On one of my breaks, we decided to give little Laki (the cat we found out in Blacksmith Fork Canyon) a bath – she smelled like skunk, and her coat was still full of all the junk she picked up out in the boonies.  Well, that was quite the adventure.  She fought as if she weighed ten times the 5.5 pounds that she does.  I have lacerations and puncture wounds all over my hands and arms, Debbie has one scratch, and unfortunately I have one deep bite on my right forefinger.  It's healing nicely and there's no sign of infection yet, so I may luck out with this one.  Poor little Laki is only slightly cleaner, and the skunk smell is less by maybe 10%.  I'm not sure how we're going to get past her terror of baths (not at all uncommon with cats, of course).  Maybe we'll just try to live long enough for the skunk smell to dissipate. :)

Yesterday evening we headed to the Cache County Fair for a couple hours of walking around before the rodeo.  One of the first things we ran into was the display (photos below) that my brother Scott helped build for the town of Newton (where he lives).  This display included the wooden stirrups that I helped make last week.  Their display took first place out of the six total entries.  This will be the last year for the town displays at the Cache County Fair – apparently there wasn't enough interest for them to continue.  Only six entries for the 30 or so towns in the county... 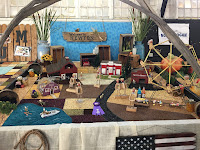 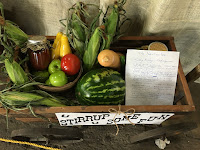 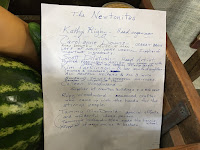 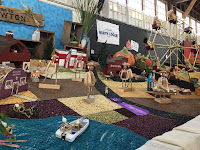 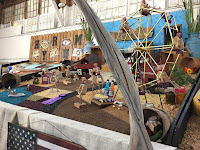 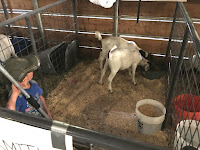 We wandered around for a bit, which was very hard for this introvert.  All the things I don't like were right in my face: crowds, noise, chaos.  I got a headache within a few minutes of arriving, and headaches are a very rare thing for me.  I was thirsty, so I stopped and got some lemonade – really, really awful lemonade!  After a half hour or so checking out the booths, we headed for the animal section.  That was a bit less crowded, and I like animals, so a much better experience for me.  We walked through the cows, steers, goats, and sheep – while skipping the birds (hot and crowded) and pigs (because they're pigs!).  In the goat section we came across a stall being tended by a young boy (photo at right), just six or seven, wielding a rake that weighed about the same as he did. :) 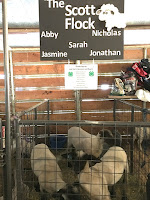 A little later, in the sheep section, we found the stall at left for the “Scott flock”.  The Scotts happen to be our neighbors; their house and pasture is just northwest of our barn.  Abby, Nicholas, and Sarah we know quite well (I tutored all three on programming for a while).  Jasmine and Jonathan are younger kids, recently adopted; we know them but not as well.  Those two are very lucky kids indeed, though they may not realize it yet – the home they have now is a paragon of wholesomeness and love in an absolute sense, but even more so relative to the home they've left.  Every time I see them I think of the selflessness of their new parents (and their other kids, too)... 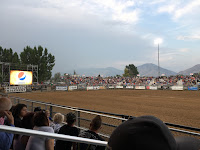 The big event for the night, though, was the rodeo.  I was too busy watching the action to take photos, and they wouldn't have come out very well anyway.  The photo at right, taken just before the rodeo started, at least gives you an idea about the venue.  Before the rodeo started, lots of people were in the arena riding horses.  Some of the riders were very young – I'd guess no more than six or seven years old, with legs so short that the stirrups were a couple feet below their feet.  Some were rodeo participants, but most were not.  I'm still not sure why all these people were riding, but it was actually quite entertaining for us – beautiful horses, interesting people (and pretty girls, too :).

The rodeo itself was by far the best one we've been to in Utah, from several perspectives.  First, the competitors were really, really good.  Most of the competitors in every event actually completed their event (i.e., the bull riders made it for 8 seconds, the steer wrestlers wrestled their steers, etc.).  Some of the competitors put on dazzling displays of talent.  Second, the event was very well-run: competitors followed each other out with very little delay, and transitions between events was smooth and fast.  Third, the audio and visual systems were very good: the audio was of excellent quality (though way too loud for my taste), and the big screen (visible at the left of the photo above) was, well, big and bright.  Our seats were outstanding.  The crowd around us was polite, engaged, and happy.  All of these things contributed to it being a most enjoyable event.  Still tough for an introvert, though!  :)

There was one event during the rodeo that I didn't expect at all, and it was quite emotional for me.  If you're not from the area, you may not have heard the story of Deserae Turner – but if you read the article at the link, you'll know why it's well known here.  Like many locals, we were shocked, followed her story avidly, and contributed toward her recovery.  Her story is the kind of thing you'd expect in a big city, not here.  Well, in a break between two rodeo events, Deserae Turner was driven around the arena while she rode in the back of a pickup.  The outpouring of emotion from the crowd – almost all locals very familiar with her story – was really something to see.  As she passed our seats, we could see that Deserae was overcome with emotion herself; her companion was holding her in a tight hug.  Just thinking about the moment has me in tears again...

This morning (soon, actually!) we have something really fun planned.  There's a lady a few miles away who has nine border collie puppies who need a new home.  Our friend Michelle H. has a young boy (A. J.) who wants a puppy more than anything else in the world – specifically, a border collie puppy that he can train for agility competition.  A. J. loves our border collie Race, and wants one just like him.  Well, we're heading up with Michelle and A. J. to see those puppies this morning.  A. J. thinks we're looking for a new puppy, and has no idea that if things work out well it's him that will be going home with one.  Hopefully he doesn't read my blog! :)  This should be lots of fun for all of us...
Posted by Unknown at (permalink) 8:12 AM