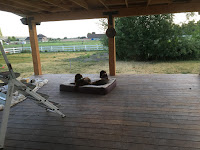 Paradise ponders: wistful puppies and plumbing edition...  Shortly after dawn this morning I caught our two field spaniel puppies (Mako and Cabo) relaxing on their (very comfortable) deck bed while gazing wistfully at the five sheep in our neighbor's pasture.  They're 16 months old now, so not really puppies any more, but we still think of them that way.  The sheep are grazing roughly 500' away, but those two would be there in a flash if only they could.  Our fence stops them (yay!), but the pasture fence is just four-strand barbed wire, which wouldn't even slow the puppies down...

Yesterday and today I mostly worked on the plumbing for the irrigation pump in the cedar shed.  That included quite a bit of running around for parts and a bit of carpentry.  The carpentry was for the rack that is holding up the two filters (the black objects in the first photo).  The water flows from right-to-left through these two filters.  The first one has a 500 micron screen; the second a 300 micron screen; these can be replaced with other sizes if we haven't guessed well at the junk content of our irrigation water.

I've had to make a few modifications to the original plan, all because my original linear design would have taken about 6 feet more than the 10 feet I actually have available.  The second photo below shows one such modification: three taps (for pressure gauge, pressure sensor, and pressure tank) are now oriented vertically rather than inline with the horizontal pipe as originally planned.  That change saved almost two feet of horizontal space.  At the far left of that same photo is another change, though it's not really visible: a union, valve, and 2"-to-3" adapter all all at 90° to that horizontal pipe, thus saving another 16".  One other change is coming with the next batch of work: a 3" full-port ball valve that I'd intended to have inside the shed will instead be outside – saving 16" all by itself.

In the third photo you can see the vertical “stack” connecting (top to bottom) a pressure gauge (with 1/4" tubing), the pressure tank (with 1" PEX), and the pressure sensor that provides feedback for the variable-speed pump controller.  Aside from the challenges related to space, so far everything is coming together well. 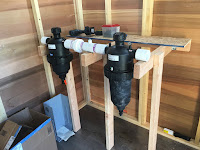 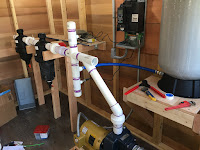 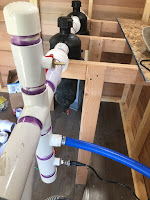 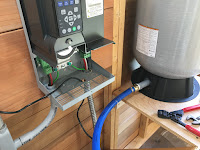