Paradise ponders: wandering iPhones, big-eye tuna, and ubiquitous WiFi edition...  Yesterday after we got home from having a lovely lunch at Los Primos with our friend Michelle H., Debbie realized that she didn't have her phone.  It's a really nice iPhone in an Otterbox case, and it's got her life on it, especially photos.  We searched everywhere, went back to the restaurant and asked, all to no avail.  Then I tried Apple's “Find my iPhone” app ... and it said the phone was offline.  Sheesh!  Not only did that mean we couldn't see where it was, we also couldn't lock the phone or take any other action to help find it.  Debbie's face was very long as she went to bed.

This morning we decided to check with the “Find my iPhone” app again, and this time it found it!  Immediately we had an address for its current location (just a few blocks from Los Primos), and we could lock the phone (which I did immediately) and put a message on it giving our phone number to anyone who might pick it up.  We got dressed, jumped in our car, and headed for the address in question.

When we arrived, we quickly figured out that the building it was in was a four unit apartment building.  There were a couple of young Hispanic men outside, dangling cigarettes and looking generally a little rough.  When we started talking with them, though, they were sympathetic to our plight.  They were roomies in unit 2 in building, knew nothing about our phone, but suggested we try the other apartments.  Because the app was showing the phone in approximately the middle of the building, and we'd already talked with people from unit 2, I tried knocking on the door of unit 3.  A sleepy-looking young girl and her wide-awake parents answered the door.  The parent spoke only Spanish, but the girl spoke English well and acted as a translator for us.  We shared our story, again they were sympathetic, but they knew nothing about our phone.  So I knocked on the doors of units 1 and 4, but nobody answered.

What to do?  The app was showing Debbie's phone was right there, but we couldn't get to it.  I couldn't think of anything else that we could do, so I called the police (the Logan City police).  I was routed to the dispatcher in seconds, and he said he'd have a unit respond soon.  About two minutes later, a cruiser pulled up and a (very young) officer got out.  He was very friendly, and asked us a few questions to figure out what was going in.  He wasn't familiar with the “Find my iPhone” app, but it made sense to him and he decided to start knocking on doors himself.  He had exactly the same results with that effort that we'd had.  Then the officer asked if we could cause the phone to make some sound, so we could see if we could hear where it was.  I remembered that the app had exactly that feature, so we tried it out.  Immediately we all heard a “pinging” sound, and we quickly narrowed that down to a locked storage closet associated with unit 4.  The phone was there, for sure – all of us were now positive we had the right place, and further that we'd narrowed it down to a single apartment.

At that point the officer started working on locating unit 4's occupant.  The other people (we had a little crowd there) knew the guy's name and that he was generally at work (in construction) until the late afternoon – but they didn't have a phone number and didn't know who he worked for.  The police officer wasn't sure he was communicating accurately, so he called for another officer to help translate.  At the same time, he got more information on unit 4's occupants by running the plates on their vehicles in the parking lot (identified by some of the other people there).  That ended up getting him on the phone with a relative of the fellow we were actually looking for – and that relative called the guy we were actually looking for, got him to drive back to see us, and then he called the police officer back to let him know what was going on.  Sure enough, a few minutes later an older Hispanic gentleman came driving in, walked straight to the locked closet with our phone, unlocked it, and with a big smile gave it back to Debbie.  Turns out that he'd eaten at Los Primos yesterday as well, and when he climbed back into his truck he noticed the phone lying on the parking lot pavement.  He's not a tech-savvy guy, so he brought it home, locked it up, and was planning to have his (more tech-savvy) son help him locate the owner tomorrow.

This was a three-way win, with lots of smiles all around.  We won, because we got Debbie's phone back (in perfect condition, too!).  The Hispanic gentleman won because he succeeded in getting the phone back to the happy owner (you should have seen his grin!) – and he got a big hug from Debbie.  The police won because they were able to help a citizen retrieve their property without even ruffling any feelings, much less causing a ruckus – lots of smiles from them, too.  That was a very pleasant way to start out our morning... 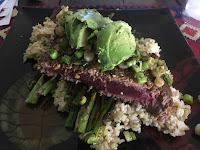 We just finished our big meal for the day, a scrumptious dish that Debbie made up on the fly after we stumbled upon some great-looking fish in Macey's, of a species we had never heard of: bigeye tuna.  The fish looked like ahi, and we see that it's closely related to the yellowfin tuna that we know as ahi.  That photo at right is my share of the piece we bought.  Debbie cooked up some brown rice as a base, with broiled fresh asparagus on that.  She seasoned the seared fish with a bunch of her low-sodium seasoning collection, plus sesame seeds (an inspired choice!).  Then she topped that with some grilled green onion slices and a half an avocado.  My oh my was that dish tasty!  We're gonna have to have that one again...

After helping my friend and neighbor Tim D. move irrigation pipe this morning, I've spent the time we weren't retrieving Debbie's phone or eating installing more Ubiquiti Unifi mesh access points.  I am determined to have rock-solid WiFi in every room of our house and barn, and in the parts of the yard we regularly inhabit as well.  I started out with four of these access points, and I was very pleased with the results on them – so I bought four more, which is what I figured I needed to get coverage everywhere we want it.  The screenshot below shows the Unifi controller's view of our Dilatush WiFi Empire right now.  The “Shop” one shows disconnected because I haven't installed it yet.  Six of the green ones are in our house, and they're all working great!  Rooms (or places within rooms) that formerly had shaky WiFi signals now have full strength signals.  Our entire back yard has a strong signal.  All of the access points have between 250 and 400 mpbs bandwidth in both directions.  It's ridiculously good!  :)

Posted by Unknown at (permalink) 4:08 PM