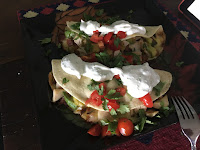 Paradise ponders: pipe, hay, floor tile, and drained cistern edition...  But first the important stuff: Debbie's big meal for today.  Debbie swears those things at right are quesadillas, but they don't look like any quesadilla I've ever seen.  But they were delectable, whatever their name might be.  Inside those tortillas was chicken, potatoes, cheese, bacon, onions, and almost certainly something else that I can't remember.  They were garnished with tomatoes and cilantro, and a heavenly sour cream-and-lime concoction that reminded me of Greek food.  My crazy wife made six of these things.  I managed to eat two of them, but only because I was ravenous.  She managed one and a half (which I'm quite impressed by).  We froze the leftovers; we'll see how well they reheat.  My lovely bride is on a roll with her cooking – two serious winners in a row.

I started my morning on my knees with a belt sander, smoothing out the joints on the floor in the cedar shed I built last week.  Just as I finished that, my friend and neighbor Tim D. came over and we moved irrigation pipe while watching the sun rise through beautiful puffy clouds over the Wasatches to our east.  While we were moving pipe, we noted Heath C. was over in his field picking up about 130 bales of hay by himself.  So when Tim and I finished moving the pipes, I went over to see if I could lend a hand.  A couple hours later, Heath and I had nearly finished picking up all the bales and moving them to a hay stack built on old pallets.  Another neighbor, Ryan P., saw us working and came over to lend a hand himself.  The three of us picked up the last trailer load of bales and got them all off the ground.  Heath's going to be back tomorrow with some tarps to cover the hay stack before the rains we expect on Monday night.  It felt good to help our new neighbor (Heath), but ... I was tired as could be after moving all that hay!

After all that, I went back to work on the cedar shed.  First I vacuumed the floor to get the sanding dust off, then I went to work installing the stick-on vinyl tile.  This tile looks for all the world like slabs of weathered spruce, and it even has the wood grain texture stamped in.  They're quite inexpensive (under $100 for 80 square feet), they look great, and they'll protect the plywood floor quite nicely.  Also, they're a breeze to install.  A couple of in-progress photos are below.  It's all installed now, and it awaits only some quarter-round trim around the edges to complete the job. 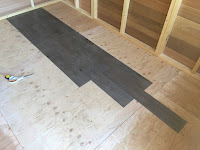 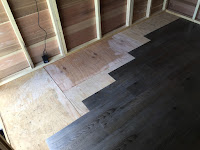 About midway through the tile installation, Debbie called me on my mobile to let me know that our house water pressure had gone to almost zero – just as she was getting ready to take a shower.  She wasn't particularly pleased by this.  I was afraid we'd had some disaster of the broken pipe variety, but then it occurred to me that I had turned on a single sprinkler a few hours before.  If our spring was filling slowly, that sprinkler might have outpaced it, and drained our 1,000 cistern.  So I turned off the sprinkler, told Debbie not to use any water, and went to look in the cistern.  The lid on the cistern is made of diamond-plate steel, and I couldn't budge it – not even with a 6' steel rod lever!  The thing is completely rusted shut.  I wanted to look and see if it was empty, and I could not.  That's another new project now, freeing the cistern lid.  Just what I need: another project!  I made another quick check of the water pressure, and it had come up substantially.  That bolstered my theory of the empty cistern.  We waited a bit longer, and the pressure came completely back to normal.  A couple hours later, Debbie took a shower without any problems.  I guess I won't be watering anything with our spring water any more!
Posted by Unknown at (permalink) 5:11 PM