Paradise ponders: another crazy day edition...  I got up a bit early today, getting all my morning chores finished before 6 am so that I could help my friend and neighbor Tim D. move irrigation pipe this morning.  We got to share the sunrise and the setting full moon, along with our usual companionable conversation.  Moving irrigation pipe isn't something I ever thought would be something I looked forward to, but ... I do. 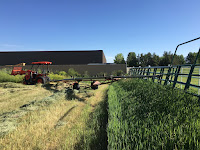 After Tim and I finished, I cranked up my tractor and headed a half mile or so up the road to pick up the pipe cart I'd arranged to borrow yesterday.  You can see it, attached to my tractor, in the photo at right.  I loaded up 26 pieces of 3" diameter aluminum irrigation pipe, lengths varying from 10' to 40'.  Most of my pieces were around 30' in length, but I had a few oddballs.  All but one piece has fittings on them, and most have sprinklers (usually with risers) on the female fittings.  I couldn't get the cart very close to the places where I had pipe piled, so I ended up moving each piece 50' or so to pile it on.  Then I drove to the corner of Heath's field (in the photo) and unloaded it all.  That was much easier, as the cart was alongside where he wanted it piled.  I'm really glad to see my old beat-up pipe going to someone who can really use it.  Heath will be here tomorrow setting up a couple of water lines on his pasture, just as soon as the baler is finished picking up the windrows you see in the photo.  After finishing all this, I was especially appreciative of the kindness of Mike C., who lent me that cart.  This would have been a far more difficult task without that handy little thing!

The contractors were here to work on the filling station today, and ... they finished!  The three photos below show what it looked like at different times today.  I've got a bit of woodworking to do in order to allow the nozzles to be racked, and the hose to move smoothly.  My electrical contractor will be here on Monday to hook up the power, and at that point we should actually have a working filling station.  It only took about 10 months!  At the end of this month we'll be traveling up to Kalispell, Montana again to pick up some more metal work we've had done.  Among the goodies on that trip will be the (lockable) door for the filling station.  Once that's one, our masons will be able to put all the rock veneer up around it (on their schedule, of course!).  Then it will actually be finished... 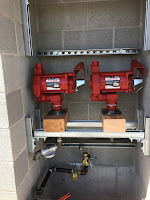 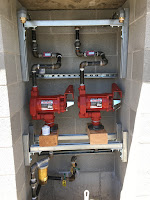 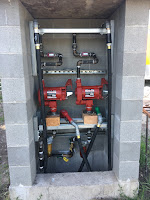 Our sprinkler contractors were also here, and they've now installed (if I'm counting correctly) 7 of the 22 total zones our system will have.  The part of the yard they're working on looks like hell – trenches and piles of dirt everywhere, and great big holes every once in a while where the valve boxes are going.  I have to keep convincing myself that the end result will be good, because it sure doesn't look like it right now!

My office air conditioning got repaired today.  The problem turned out to be a simple (and relatively inexpensive) one: the refrigerant had leaked out of the unit.  All they had to do was refill it, fix the leaking connection, and now my office has the feel of a meat locker.  Lovely, that is! 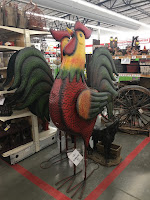 Debbie and I went up to Tractor Supply this afternoon to buy birdseed (we're going through about 40 pounds a week right now, I think because the parent birds are busy feeding babies).  While there, I spotted the ... thing ... at right.  It's a $200, 6' tall, sheet metal rooster.  Why?  This one store has eight of them in stock.  Are there really eight people in the area who would buy such a thing?
Posted by Unknown at (permalink) 5:27 PM