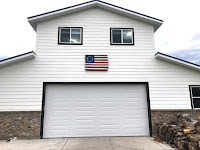 Paradise ponders: remembrance edition...  My mom died one year ago today.  It's a lot easier for me to think about this today, but still painful.  This morning as I walked out to my barn, I looked up at the flag she made, now installed on my barn (at right).  I often look at it and think of her, but knowing the date today it stopped me in my tracks for a few minutes, just thinking about what my day was like a year ago.

That morning our phone rang about 1 am.  It was my mom's hospice nurse, a friendly and ever-helpful young woman.  The call woke me up, of course, and while I was still half asleep she gave me the news that my mom had died – peacefully, painlessly, in her sleep.  As I worked myself out of my grogginess, it occurred to me that this poor nurse must have to make calls like this often – how awful!  I started a conversation with her about this, and she told me that these calls were by far the hardest part of her job.  She loved caring for the people in hospice ... but letting her patients' loved ones know that her patient had died was really tough for her.  I told her that I admired her courage – I'm not at all sure I could regularly do that – and that I, for one, appreciated the way that she did her job.  I was able to tell her, truthfully, that my mom thought she was one of the nicest people she'd ever met.  And I seconded that opinion.  I've talked with her several times in the ensuing year, each time because she was calling to see how I was doing...

I had another busy day yesterday.

My replacement router arrived, and I was able to bring it up, completely configured, within just minutes.  It worked on the first try after installing it, and my office IT situation is back to normal.  Yay!  Even better, when I contacted Amazon (where I had purchased the failed router), they told me they'd be happy to refund the amount I'd spent on it, no questions asked.  They just want the old one back, and they'll pay for the shipping.  That kind of customer service keeps me in the mode I'm in these days: the first question I ask myself when I want to buy something – anything – is: can I buy it on Amazon?

The laptop I'm using to write this post is a five year old Macbook Pro.  It still works just fine, but it's a bit short on storage (just 500GB) and the battery life isn't the greatest (about 2.5 hours).  The most recent versions of the Macbook Pros are considerably better on both counts: 2TB of SSD storage, plus around 10 hours of battery life.  That's good enough to finally tempt me into getting a new one.  I put mine on order this morning; should be here before the end of the month.

The sprinkler contractor is making good progress.  The first two zones were pressurized yesterday – first water!  The first two photos below show one of the solenoid valves that control the zones, along with a drain (open in the fall, closed before first irrigation in the spring).  The third photo shows a set of sprinklers going.  Yay! 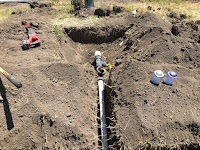 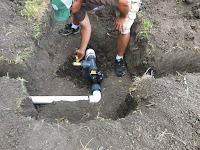 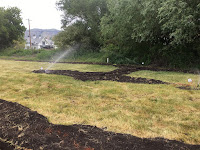 Because the sprinklers are going in, I now have about 20 lengths of sprinkler pipe that I no longer need.  A new neighbor of ours (Heath C.) bought a 2.5 acre lot about a quarter mile north of us.  He and his family are pinching pennies to save up the money to build a house on that land, but he needs sprinkler pipe to keep his land green.  I offered him my pipe, and he eagerly accepted – though he swears he's going to find a way to pay me back (I wouldn't take any money for my old, beat up pipe).  I noticed a pipe cart (for behind a tractor) parked up on the land of someone I know.  This morning I stopped by his house to see if I could borrow the cart, and he said “Of course you can borrow it!”  So tomorrow morning I'm going to run up and grab that cart, haul the pipe over to Heath's, and then take the cart back.  This will give me much pleasure, to give back a little to the neighborhood that has been so kind to us...

This morning my friend and neighbor Tim D. started moving irrigation pipe for the first time this year.  Debbie spotted him out there by himself (he's 74 and just had back surgery!), so she called me to go out and help.  That's always fun to do with Tim – lots of companionable conversation and smiles.  Amazingly enough, none of the sprinkler heads were plugged up by anything.  That rarely happens! 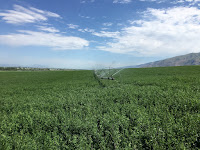 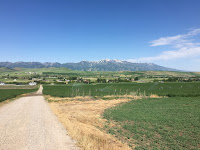 Yesterday morning I took a nice walk, on my usual route, with Cabo.  Our little valley is so beautiful this time of year.  There's still a bit of snow on the highest peaks, but I suspect that will be all gone within a week.  Green stretches right up to timberline now.  In a week or two, some of the mountain grasses will start turning brown, so things won't look quite as verdant up there.  In the valley and on the lower hillsides, though, the irrigated fields will be a beautiful green all summer long...

Yesterday and today my filling station contractor is hard at work mounting the pumps.  I've been helping a bit, on the wooden mounts we needed for the pumps.  Once that's done (should be any moment now), the rest will just be plumbing.  On Monday my electrical contractor should be here to put in the explosion-proof electrical feed for those pumps.  At that point we should have a grand filling station!  Toward the end of the month the steel door for the filling station should be done.  It's lockable, so we'll be safe from the predations of any unsavory characters who might decide to liberate some fuel.  That's fairly unlikely around here, but you never know...
Posted by Unknown at (permalink) 1:44 PM